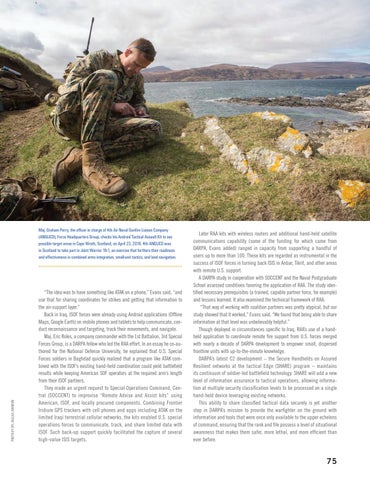 “The idea was to have something like ATAK on a phone,” Evans said, “and use that for sharing coordinates for strikes and getting that information to the air-support layer.” Back in Iraq, ISOF forces were already using Android applications (Offline Maps, Google Earth) on mobile phones and tablets to help communicate, conduct reconnaissance and targeting, track their movements, and navigate. Maj. Eric Roles, a company commander with the 1st Battalion, 3rd Special Forces Group, is a DARPA fellow who led the RAA effort. In an essay he co-authored for the National Defense University, he explained that U.S. Special Forces soldiers in Baghdad quickly realized that a program like ATAK combined with the ISOF’s existing hand-held coordination could yield battlefield results while keeping American SOF operators at the required arm’s length from their ISOF partners. They made an urgent request to Special Operations Command, Central (SOCCENT) to improvise “Remote Advise and Assist kits” using American, ISOF, and locally procured components. Combining Frontier Iridium GPS trackers with cell phones and apps including ATAK on the limited Iraqi terrestrial cellular networks, the kits enabled U.S. special operations forces to communicate, track, and share limited data with ISOF. Such back-up support quickly facilitated the capture of several high-value ISIS targets.

Later RAA kits with wireless routers and additional hand-held satellite communications capability (some of the funding for which came from DARPA, Evans added) ranged in capacity from supporting a handful of users up to more than 100. These kits are regarded as instrumental in the success of ISOF forces in turning back ISIS in Anbar, Tikrit, and other areas with remote U.S. support. A DARPA study in cooperation with SOCCENT and the Naval Postgraduate School assessed conditions favoring the application of RAA. The study identified necessary prerequisites (a trained, capable partner force, for example) and lessons learned. It also examined the technical framework of RAA. “That way of working with coalition partners was pretty atypical, but our study showed that it worked,” Evans said. “We found that being able to share information at that level was unbelievably helpful.” Though deployed in circumstances specific to Iraq, RAA’s use of a handheld application to coordinate remote fire support from U.S. forces merged with nearly a decade of DARPA development to empower small, dispersed frontline units with up-to-the-minute knowledge. DARPA’s latest C2 development – the Secure Handhelds on Assured Resilient networks at the tactical Edge (SHARE) program – maintains its continuum of soldier-led battlefield technology. SHARE will add a new level of information assurance to tactical operations, allowing information at multiple security classification levels to be processed on a single hand-held device leveraging existing networks. This ability to share classified tactical data securely is yet another step in DARPA’s mission to provide the warfighter on the ground with information and tools that were once only available to the upper echelons of command, ensuring that the rank and file possess a level of situational awareness that makes them safer, more lethal, and more efficient than ever before.