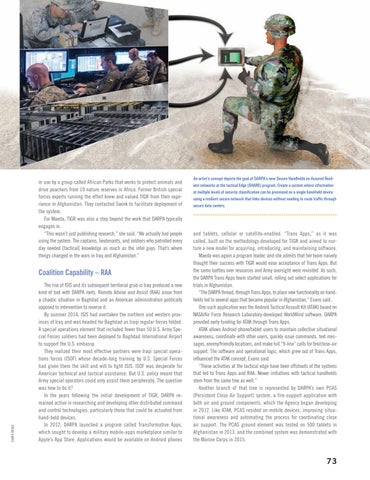 in use by a group called African Parks that works to protect animals and drive poachers from 10 nature reserves in Africa. Former British special forces experts running the effort knew and valued TIGR from their experience in Afghanistan. They contacted Swink to facilitate deployment of the system. For Maeda, TIGR was also a step beyond the work that DARPA typically engages in. “This wasn’t just publishing research,” she said. “We actually had people using the system. The captains, lieutenants, and soldiers who patrolled every day needed [tactical] knowledge as much as the intel guys. That’s where things changed in the wars in Iraq and Afghanistan.”

Coalition Capability – RAA The rise of ISIS and its subsequent territorial grab in Iraq produced a new kind of tool with DARPA roots. Remote Advise and Assist (RAA) arose from a chaotic situation in Baghdad and an American administration politically opposed to intervention to reverse it. By summer 2014, ISIS had overtaken the northern and western provinces of Iraq and was headed for Baghdad as Iraqi regular forces folded. A special operations element that included fewer than 50 U.S. Army Special Forces soldiers had been deployed to Baghdad International Airport to support the U.S. embassy. They realized their most effective partners were Iraqi special operations forces (ISOF) whose decade-long training by U.S. Special Forces had given them the skill and will to fight ISIS. ISOF was desperate for American technical and tactical assistance. But U.S. policy meant that Army special operators could only assist them peripherally. The question was how to do it? In the years following the initial development of TIGR, DARPA remained active in researching and developing other distributed command and control technologies, particularly those that could be actuated from hand-held devices. In 2012, DARPA launched a program called Transformative Apps, which sought to develop a military mobile-apps marketplace similar to Apple’s App Store. Applications would be available on Android phones

An artist’s concept depicts the goal of DARPA’s new Secure Handhelds on Assured Resilient networks at the tactical Edge (SHARE) program: Create a system where information at multiple levels of security classification can be processed on a single hand-held device using a resilient secure network that links devices without needing to route traffic through secure data centers.

and tablets, cellular or satellite-enabled. “Trans Apps,” as it was called, built on the methodology developed for TIGR and aimed to nurture a new model for acquiring, introducing, and maintaining software. Maeda was again a program leader, and she admits that her team naively thought their success with TIGR would ease acceptance of Trans Apps. But the same battles over resources and Army oversight were revisited. As such, the DARPA Trans Apps team started small, rolling out select applications for trials in Afghanistan. “The DARPA thread, through Trans Apps, to place new functionality on handhelds led to several apps that became popular in Afghanistan,” Evans said. One such application was the Android Tactical Assault Kit (ATAK) based on NASA/Air Force Research Laboratory-developed WorldWind software. DARPA provided early funding for ATAK through Trans Apps. ATAK allows Android phone/tablet users to maintain collective situational awareness, coordinate with other users, quickly issue commands, text messages, enemy/friendly locations, and make full “9-line” calls for fire/close-air support. The software and operational logic, which grew out of Trans Apps, influenced the ATAK concept, Evans said. “These activities at the tactical edge have been offshoots of the systems that led to Trans Apps and RAA. Newer initiatives with tactical handhelds stem from the same tree as well.” Another branch of that tree is represented by DARPA’s own PCAS (Persistent Close Air Support) system, a fire-support application with both air and ground components, which the Agency began developing in 2012. Like ATAK, PCAS resided on mobile devices, improving situational awareness and automating the process for coordinating close air support. The PCAS ground element was tested on 500 tablets in Afghanistan in 2013, and the combined system was demonstrated with the Marine Corps in 2015.