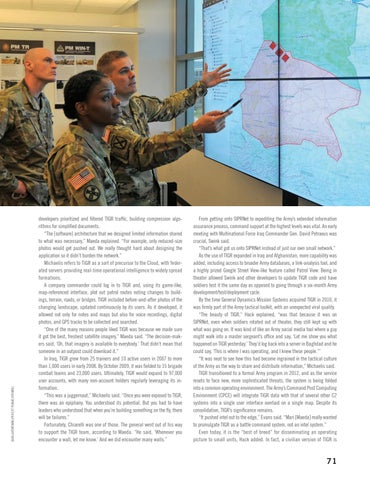 developers prioritized and filtered TIGR traffic, building compression algorithms for simplified documents. “The [software] architecture that we designed limited information shared to what was necessary,” Maeda explained. “For example, only reduced-size photos would get pushed out. We really thought hard about designing the application so it didn’t burden the network.” Michaelis refers to TIGR as a sort of precursor to the Cloud, with federated servers providing real-time operational intelligence to widely spread formations. A company commander could log in to TIGR and, using its game-like, map-referenced interface, plot out patrol routes noting changes to buildings, terrain, roads, or bridges. TIGR included before-and-after photos of the changing landscape, updated continuously by its users. As it developed, it allowed not only for notes and maps but also for voice recordings, digital photos, and GPS tracks to be collected and searched. “One of the many reasons people liked TIGR was because we made sure it got the best, freshest satellite imagery,” Maeda said. “The decision-makers said, ‘Oh, that imagery is available to everybody.’ That didn’t mean that someone in an outpost could download it.” In Iraq, TIGR grew from 25 trainers and 10 active users in 2007 to more than 1,000 users in early 2008. By October 2009, it was fielded to 15 brigade combat teams and 23,000 users. Ultimately, TIGR would expand to 97,000 user accounts, with many non-account holders regularly leveraging its information. “This was a juggernaut,” Michaelis said. “Once you were exposed to TIGR, there was an epiphany. You understood its potential. But you had to have leaders who understood that when you’re building something on the fly, there will be failures.” Fortunately, Chiarelli was one of those. The general went out of his way to support the TIGR team, according to Maeda. “He said, ‘Whenever you encounter a wall, let me know.’ And we did encounter many walls.”

From getting onto SIPRNet to expediting the Army’s extended information assurance process, command support at the highest levels was vital. An early meeting with Multinational Force Iraq Commander Gen. David Petraeus was crucial, Swink said. “That’s what got us onto SIPRNet instead of just our own small network.” As the use of TIGR expanded in Iraq and Afghanistan, more capability was added, including access to broader Army databases, a link-analysis tool, and a highly prized Google Street View-like feature called Patrol View. Being in theater allowed Swink and other developers to update TIGR code and have soldiers test it the same day as opposed to going through a six-month Army development/test/deployment cycle. By the time General Dynamics Mission Systems acquired TIGR in 2010, it was firmly part of the Army tactical toolkit, with an unexpected viral quality. “The beauty of TIGR,” Hack explained, “was that because it was on SIPRNet, even when soldiers rotated out of theater, they still kept up with what was going on. It was kind of like an Army social media tool where a guy might walk into a master sergeant’s office and say, ‘Let me show you what happened on TIGR yesterday.’ They’d log back into a server in Baghdad and he could say, ‘This is where I was operating, and I knew these people.’” “It was neat to see how this had become ingrained in the tactical culture of the Army as the way to share and distribute information,” Michaelis said. TIGR transitioned to a formal Army program in 2012, and as the service resets to face new, more sophisticated threats, the system is being folded into a common operating environment. The Army’s Command Post Computing Environment (CPCE) will integrate TIGR data with that of several other C2 systems into a single user interface overlaid on a single map. Despite its consolidation, TIGR’s significance remains. “It pushed intel out to the edge,” Evans said. “Mari [Maeda] really wanted to promulgate TIGR as a battle command system, not an intel system.” Even today, it is the “best of breed” for disseminating an operating picture to small units, Hack added. In fact, a civilian version of TIGR is