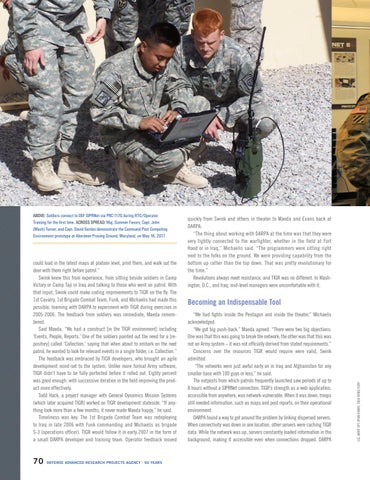 could load in the latest maps at platoon level, print them, and walk out the door with them right before patrol.” Swink knew this from experience, from sitting beside soldiers in Camp Victory or Camp Taji in Iraq and talking to those who went on patrol. With that input, Swink could make coding improvements to TIGR on the fly. The 1st Cavalry, 1st Brigade Combat Team, Funk, and Michaelis had made this possible, teaming with DARPA to experiment with TIGR during exercises in 2005-2006. The feedback from soldiers was immediate, Maeda remembered. Said Maeda, “We had a construct [in the TIGR environment] including ‘Events, People, Reports.’ One of the soldiers pointed out the need for a [repository] called ‘Collection,’ saying that when about to embark on the next patrol, he wanted to look for relevant events in a single folder, i.e. Collection.” The feedback was embraced by TIGR developers, who brought an agile development mind-set to the system. Unlike more formal Army software, TIGR didn’t have to be fully perfected before it rolled out. Eighty percent was good enough, with successive iteration in the field improving the product more effectively. Todd Hack, a project manager with General Dynamics Mission Systems (which later acquired TIGR) worked on TIGR development stateside. “If anything took more than a few months, it never made Maeda happy,” he said. Timeliness was key. The 1st Brigade Combat Team was redeploying to Iraq in late 2006 with Funk commanding and Michaelis as brigade S-3 (operations officer). TIGR would follow it in early 2007 in the form of a small DARPA developer and training team. Operator feedback moved

quickly from Swink and others in theater to Maeda and Evans back at DARPA. “The thing about working with DARPA at the time was that they were very tightly connected to the warfighter, whether in the field at Fort Hood or in Iraq,” Michaelis said. “The programmers were sitting right next to the folks on the ground. We were providing capability from the bottom up rather than the top down. That was pretty revolutionary for the time.” Revolutions always meet resistance, and TIGR was no different. In Washington, D.C., and Iraq, mid-level managers were uncomfortable with it.

Becoming an Indispensable Tool “We had fights inside the Pentagon and inside the theater,” Michaelis acknowledged. “We got big push-back,” Maeda agreed. “There were two big objections: One was that this was going to break the network; the other was that this was not an Army system – it was not officially derived from stated requirements.” Concerns over the resources TIGR would require were valid, Swink admitted. “The networks were just awful early on in Iraq and Afghanistan for any smaller base with 100 guys or less,” he said. The outposts from which patrols frequently launched saw periods of up to 8 hours without a SIPRNet connection. TIGR’s strength as a web application, accessible from anywhere, was network-vulnerable. When it was down, troops still needed information, such as maps and post reports, on their operational environment. DARPA found a way to get around the problem by linking dispersed servers. When connectivity was down in one location, other servers were caching TIGR data. While the network was up, servers constantly loaded information in the background, making it accessible even when connections dropped. DARPA