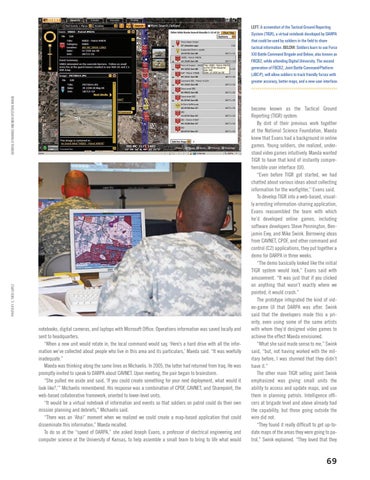 LEFT: A screenshot of the Tactical Ground Reporting System (TIGR), a virtual notebook developed by DARPA that could be used by soldiers in the field to share tactical information. BELOW: Soldiers learn to use Force XXI Battle Command Brigade and Below, also known as FBCB2, while attending Digital University. The second generation of FBCB2, Joint Battle Command-Platform (JBC-P), will allow soldiers to track friendly forces with greater accuracy, better maps, and a new user interface.

notebooks, digital cameras, and laptops with Microsoft Office. Operations information was saved locally and sent to headquarters. “When a new unit would rotate in, the local command would say, ‘Here’s a hard drive with all the information we’ve collected about people who live in this area and its particulars,’ Maeda said. “It was woefully inadequate.” Maeda was thinking along the same lines as Michaelis. In 2005, the latter had returned from Iraq. He was promptly invited to speak to DARPA about CAVNET. Upon meeting, the pair began to brainstorm. “She pulled me aside and said, ‘If you could create something for your next deployment, what would it look like?,’” Michaelis remembered. His response was a combination of CPOF, CAVNET, and Sharepoint, the web-based collaborative framework, oriented to lower-level units. “It would be a virtual notebook of information and events so that soldiers on patrol could do their own mission planning and debriefs,” Michaelis said. “There was an ‘Aha!’ moment when we realized we could create a map-based application that could disseminate this information,” Maeda recalled. To do so at the “speed of DARPA,” she asked Joseph Evans, a professor of electrical engineering and computer science at the University of Kansas, to help assemble a small team to bring to life what would

become known as the Tactical Ground Reporting (TIGR) system. By dint of their previous work together at the National Science Foundation, Maeda knew that Evans had a background in online games. Young soldiers, she realized, understood video games intuitively. Maeda wanted TIGR to have that kind of instantly comprehensible user interface (UI). “Even before TIGR got started, we had chatted about various ideas about collecting information for the warfighter,” Evans said. To develop TIGR into a web-based, visually arresting information-sharing application, Evans reassembled the team with which he’d developed online games, including software developers Steve Pennington, Benjamin Ewy, and Mike Swink. Borrowing ideas from CAVNET, CPOF, and other command and control (C2) applications, they put together a demo for DARPA in three weeks. “The demo basically looked like the initial TIGR system would look,” Evans said with amusement. “It was just that if you clicked on anything that wasn’t exactly where we pointed, it would crash.” The prototype integrated the kind of video-game UI that DARPA was after. Swink said that the developers made this a priority, even using some of the same artists with whom they’d designed video games to achieve the effect Maeda envisioned. “What she said made sense to me,” Swink said, “but, not having worked with the military before, I was stunned that they didn’t have it.” The other main TIGR selling point Swink emphasized was giving small units the ability to access and update maps, and use them in planning patrols. Intelligence officers at brigade level and above already had the capability, but those going outside the wire did not. “They found it really difficult to get up-todate maps of the areas they were going to patrol,” Swink explained. “They loved that they