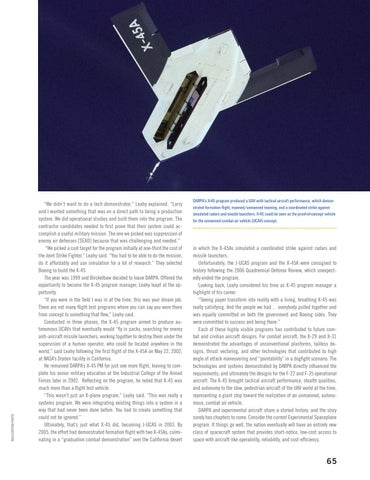 “We didn’t want to do a tech demonstrator,” Leahy explained. “Larry and I wanted something that was on a direct path to being a production system. We did operational studies and built them into the program. The contractor candidates needed to first prove that their system could accomplish a useful military mission. The one we picked was suppression of enemy air defenses [SEAD] because that was challenging and needed.” “We picked a cost target for the program initially at one-third the cost of the Joint Strike Fighter,” Leahy said. “You had to be able to do the mission, do it affordably and use simulation for a lot of research.” They selected Boeing to build the X-45. The year was 1999 and Birckelbaw decided to leave DARPA. Offered the opportunity to become the X-45 program manager, Leahy leapt at the opportunity. “If you were in the field I was in at the time, this was your dream job. There are not many flight test programs where you can say you were there from concept to something that flew,” Leahy said. Conducted in three phases, the X-45 program aimed to produce autonomous UCAVs that eventually would “fly in packs, searching for enemy anti-aircraft missile launchers, working together to destroy them under the supervision of a human operator, who could be located anywhere in the world,” said Leahy following the first flight of the X-45A on May 22, 2002, at NASA’s Dryden facility in California. He remained DARPA’s X-45 PM for just one more flight, leaving to complete his senior military education at the Industrial College of the Armed Forces later in 2002. Reflecting on the program, he noted that X-45 was much more than a flight test vehicle. “This wasn’t just an X-plane program,” Leahy said. “This was really a systems program. We were integrating existing things into a system in a way that had never been done before. You had to create something that could not be ignored.” Ultimately, that’s just what X-45 did, becoming J-UCAS in 2003. By 2005, the effort had demonstrated formation flight with two X-45As, culminating in a “graduation combat demonstration” over the California desert

DARPA’s X-45 program produced a UAV with tactical aircraft performance, which demonstrated formation flight, manned/unmanned teaming, and a coordinated strike against simulated radars and missile launchers. X-45 could be seen as the proof-of-concept vehicle for the unmanned combat air vehicle (UCAV) concept.

in which the X-45As simulated a coordinated strike against radars and missile launchers. Unfortunately, the J-UCAS program and the X-45A were consigned to history following the 2006 Quadrennial Defense Review, which unexpectedly ended the program. Looking back, Leahy considered his time as X-45 program manager a highlight of his career. “Seeing paper transform into reality with a living, breathing X-45 was really satisfying. And the people we had… everybody pulled together and was equally committed on both the government and Boeing sides. They were committed to success and being there.” Each of these highly visible programs has contributed to future combat and civilian aircraft designs. For combat aircraft, the X-29 and X-31 demonstrated the advantages of unconventional planforms, tailless designs, thrust vectoring, and other technologies that contributed to high angle of attack maneuvering and “pointability” in a dogfight scenario. The technologies and systems demonstrated by DARPA directly influenced the requirements, and ultimately the designs for the F-22 and F-35 operational aircraft. The X-45 brought tactical aircraft performance, stealth qualities, and autonomy to the slow, pedestrian aircraft of the UAV world at the time, representing a giant step toward the realization of an unmanned, autonomous, combat air vehicle. DARPA and experimental aircraft share a storied history, and the story surely has chapters to come. Consider the current Experimental Spaceplane program. If things go well, the nation eventually will have an entirely new class of spacecraft system that provides short-notice, low-cost access to space with aircraft-like operability, reliability, and cost-efficiency.