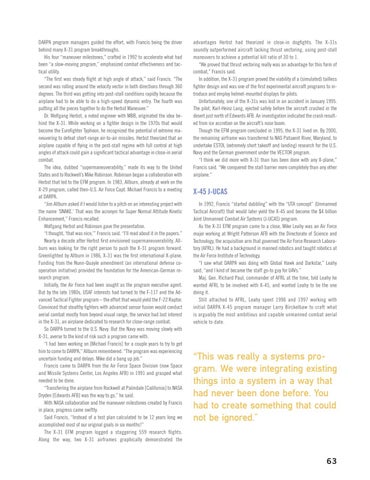 DARPA program managers guided the effort, with Francis being the driver behind many X-31 program breakthroughs. His four “maneuver milestones,” crafted in 1992 to accelerate what had been “a slow-moving program,” emphasized combat effectiveness and tactical utility. “The first was steady flight at high angle of attack,” said Francis. “The second was rolling around the velocity vector in both directions through 360 degrees. The third was getting into post-stall conditions rapidly because the airplane had to be able to do a high-speed dynamic entry. The fourth was putting all the pieces together to do the Herbst Maneuver.” Dr. Wolfgang Herbst, a noted engineer with MBB, originated the idea behind the X-31. While working on a fighter design in the 1970s that would become the Eurofighter Typhoon, he recognized the potential of extreme maneuvering to defeat short-range air-to-air missiles. Herbst theorized that an airplane capable of flying in the post-stall regime with full control at high angles of attack could gain a significant tactical advantage in close-in aerial combat. The idea, dubbed “supermaneuverability,” made its way to the United States and to Rockwell’s Mike Robinson. Robinson began a collaboration with Herbst that led to the EFM program. In 1983, Allburn, already at work on the X-29 program, called then-U.S. Air Force Capt. Michael Francis to a meeting at DARPA. “Jim Allburn asked if I would listen to a pitch on an interesting project with the name ‘SNAKE.’ That was the acronym for Super Normal Attitude Kinetic Enhancement,” Francis recalled. Wolfgang Herbst and Robinson gave the presentation. “I thought, ‘that was nice,’” Francis said. “I’ll read about it in the papers.” Nearly a decade after Herbst first envisioned supermaneuverability, Allburn was looking for the right person to push the X-31 program forward. Greenlighted by Allburn in 1986, X-31 was the first international X-plane. Funding from the Nunn-Quayle amendment (an international defense cooperation initiative) provided the foundation for the American-German research program. Initially, the Air Force had been sought as the program executive agent. But by the late 1980s, USAF interests had turned to the F-117 and the Advanced Tactical Fighter program – the effort that would yield the F-22 Raptor. Convinced that stealthy fighters with advanced sensor fusion would conduct aerial combat mostly from beyond visual range, the service had lost interest in the X-31, an airplane dedicated to research for close-range combat. So DARPA turned to the U.S. Navy. But the Navy was moving slowly with X-31, averse to the kind of risk such a program came with. “I had been working on [Michael Francis] for a couple years to try to get him to come to DARPA,” Allburn remembered. “The program was experiencing uncertain funding and delays. Mike did a bang up job.” Francis came to DARPA from the Air Force Space Division (now Space and Missile Systems Center, Los Angeles AFB) in 1991 and grasped what needed to be done. “Transferring the airplane from Rockwell at Palmdale [California] to NASA Dryden [Edwards AFB] was the way to go,” he said. With NASA collaboration and the maneuver milestones created by Francis in place, progress came swiftly. Said Francis, “Instead of a test plan calculated to be 12 years long we accomplished most of our original goals in six months!” The X-31 EFM program logged a staggering 559 research flights. Along the way, two X-31 airframes graphically demonstrated the

advantages Herbst had theorized in close-in dogfights. The X-31s soundly outperformed aircraft lacking thrust vectoring, using post-stall maneuvers to achieve a potential kill ratio of 30 to 1. “We proved that thrust vectoring really was an advantage for this form of combat,” Francis said. In addition, the X-31 program proved the viability of a (simulated) tailless fighter design and was one of the first experimental aircraft programs to introduce and employ helmet-mounted displays for pilots. Unfortunately, one of the X-31s was lost in an accident in January 1995. The pilot, Karl-Heinz Lang, ejected safely before the aircraft crashed in the desert just north of Edwards AFB. An investigation indicated the crash resulted from ice accretion on the aircraft’s nose boom. Though the EFM program concluded in 1995, the X-31 lived on. By 2000, the remaining airframe was transferred to NAS Patuxent River, Maryland, to undertake ESTOL (extremely short takeoff and landing) research for the U.S. Navy and the German government under the VECTOR program. “I think we did more with X-31 than has been done with any X-plane,” Francis said. “We conquered the stall barrier more completely than any other airplane.”

X-45 J-UCAS In 1992, Francis “started dabbling” with the “UTA concept” (Unmanned Tactical Aircraft) that would later yield the X-45 and become the $4 billion Joint Unmanned Combat Air Systems (J-UCAS) program. As the X-31 EFM program came to a close, Mike Leahy was an Air Force major working at Wright Patterson AFB with the Directorate of Science and Technology, the acquisition arm that governed the Air Force Research Laboratory (AFRL). He had a background in manned robotics and taught robotics at the Air Force Institute of Technology. “I saw what DARPA was doing with Global Hawk and Darkstar,” Leahy said, “and I kind of became the staff go-to guy for UAVs.” Maj. Gen. Richard Paul, commander of AFRL at the time, told Leahy he wanted AFRL to be involved with X-45, and wanted Leahy to be the one doing it. Still attached to AFRL, Leahy spent 1996 and 1997 working with initial DARPA X-45 program manager Larry Birckelbaw to craft what is arguably the most ambitious and capable unmanned combat aerial vehicle to date.

“This was really a systems program. We were integrating existing things into a system in a way that had never been done before. You had to create something that could not be ignored.”