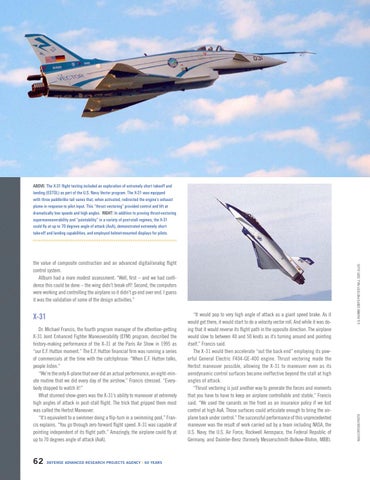 X-31 Dr. Michael Francis, the fourth program manager of the attention-getting X-31 Joint Enhanced Fighter Maneuverability (EFM) program, described the history-making performance of the X-31 at the Paris Air Show in 1995 as “our E.F. Hutton moment.” The E.F. Hutton financial firm was running a series of commercials at the time with the catchphrase: “When E.F. Hutton talks, people listen.” “We’re the only X-plane that ever did an actual performance, an eight-minute routine that we did every day of the airshow,” Francis stressed. “Everybody stopped to watch it!” What stunned show-goers was the X-31’s ability to maneuver at extremely high angles of attack in post-stall flight. The trick that gripped them most was called the Herbst Maneuver. “It’s equivalent to a swimmer doing a flip-turn in a swimming pool,” Francis explains. “You go through zero forward flight speed. X-31 was capable of pointing independent of its flight path.” Amazingly, the airplane could fly at up to 70 degrees angle of attack (AoA).

“It would pop to very high angle of attack as a giant speed brake. As it would get there, it would start to do a velocity vector roll. And while it was doing that it would reverse its flight path in the opposite direction. The airplane would slow to between 40 and 50 knots as it’s turning around and pointing itself,” Francis said. The X-31 would then accelerate “out the back end” employing its powerful General Electric F404-GE-400 engine. Thrust vectoring made the Herbst maneuver possible, allowing the X-31 to maneuver even as its aerodynamic control surfaces became ineffective beyond the stall at high angles of attack. “Thrust vectoring is just another way to generate the forces and moments that you have to have to keep an airplane controllable and stable,” Francis said. “We used the canards on the front as an insurance policy if we lost control at high AoA. Those surfaces could articulate enough to bring the airplane back under control.” The successful performance of this unprecedented maneuver was the result of work carried out by a team including NASA, the U.S. Navy, the U.S. Air Force, Rockwell Aerospace, the Federal Republic of Germany, and Daimler-Benz (formerly Messerschmitt-Bolkow-Blohm, MBB).

the value of composite construction and an advanced digital/analog flight control system. Allburn had a more modest assessment: “Well, first – and we had confidence this could be done – the wing didn’t break off! Second, the computers were working and controlling the airplane so it didn’t go end over end. I guess it was the validation of some of the design activities.”

ABOVE: The X-31 flight testing included an exploration of extremely short takeoff and landing (ESTOL) as part of the U.S. Navy Vector program. The X-31 was equipped with three paddle-like tail vanes that, when activated, redirected the engine’s exhaust plume in response to pilot input. This “thrust vectoring” provided control and lift at dramatically low speeds and high angles. RIGHT: In addition to proving thrust-vectoring supermaneuverability and “pointability” in a variety of post-stall regimes, the X-31 could fly at up to 70 degrees angle of attack (AoA), demonstrated extremely short take-off and landing capabilities, and employed helmet-mounted displays for pilots.