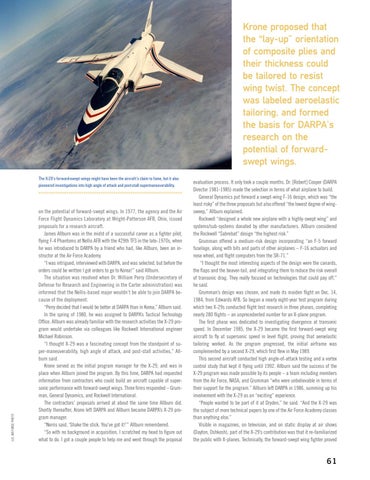 Krone proposed that the “lay-up” orientation of composite plies and their thickness could be tailored to resist wing twist. The concept was labeled aeroelastic tailoring, and formed the basis for DARPA’s research on the potential of forwardswept wings.

The X-29’s forward-swept wings might have been the aircraft’s claim to fame, but it also pioneered investigations into high angle of attack and post-stall supermaneuverability.

on the potential of forward-swept wings. In 1977, the agency and the Air Force Flight Dynamics Laboratory at Wright-Patterson AFB, Ohio, issued proposals for a research aircraft. James Allburn was in the midst of a successful career as a fighter pilot, flying F-4 Phantoms at Nellis AFB with the 429th TFS in the late-1970s, when he was introduced to DARPA by a friend who had, like Allburn, been an instructor at the Air Force Academy. “I was intrigued, interviewed with DARPA, and was selected, but before the orders could be written I got orders to go to Korea!” said Allburn. The situation was resolved when Dr. William Perry (Undersecretary of Defense for Research and Engineering in the Carter administration) was informed that the Nellis-based major wouldn’t be able to join DARPA because of the deployment. “Perry decided that I would be better at DARPA than in Korea,” Allburn said. In the spring of 1980, he was assigned to DARPA’s Tactical Technology Office. Allburn was already familiar with the research activities the X-29 program would undertake via colleagues like Rockwell International engineer Michael Robinson. “I thought X-29 was a fascinating concept from the standpoint of super-maneuverability, high angle of attack, and post-stall activities,” Allburn said. Krone served as the initial program manager for the X-29, and was in place when Allburn joined the program. By this time, DARPA had requested information from contractors who could build an aircraft capable of supersonic performance with forward-swept wings. Three firms responded – Grumman, General Dynamics, and Rockwell International. The contractors’ proposals arrived at about the same time Allburn did. Shortly thereafter, Krone left DARPA and Allburn became DARPA’s X-29 program manager. “Norris said, ‘Shake the stick. You’ve got it!’” Allburn remembered. “So with no background in acquisition, I scratched my head to figure out what to do. I got a couple people to help me and went through the proposal

evaluation process. It only took a couple months. Dr. [Robert] Cooper (DARPA Director 1981-1985) made the selection in terms of what airplane to build. General Dynamics put forward a swept-wing F-16 design, which was “the least risky” of the three proposals but also offered “the lowest degree of wingsweep,” Allburn explained. Rockwell “designed a whole new airplane with a highly-swept wing” and systems/sub-systems donated by other manufacturers. Allburn considered the Rockwell “Sabrebat” design “the highest risk.” Grumman offered a medium-risk design incorporating “an F-5 forward fuselage, along with bits and parts of other airplanes – F-16 actuators and nose wheel, and flight computers from the SR-71.” “I thought the most interesting aspects of the design were the canards, the flaps and the beaver-tail, and integrating them to reduce the risk overall of transonic drag. They really focused on technologies that could pay off,” he said. Grumman’s design was chosen, and made its maiden flight on Dec. 14, 1984, from Edwards AFB. So began a nearly eight-year test program during which two X-29s conducted flight test research in three phases, completing nearly 280 flights – an unprecedented number for an X-plane program. The first phase was dedicated to investigating divergence at transonic speed. In December 1985, the X-29 became the first forward-swept wing aircraft to fly at supersonic speed in level flight, proving that aeroelastic tailoring worked. As the program progressed, the initial airframe was complemented by a second X-29, which first flew in May 1989. This second aircraft conducted high angle-of-attack testing and a vortex control study that kept it flying until 1992. Allburn said the success of the X-29 program was made possible by its people – a team including members from the Air Force, NASA, and Grumman “who were unbelievable in terms of their support for the program.” Allburn left DARPA in 1986, summing up his involvement with the X-29 as an “exciting” experience. “People wanted to be part of it at Dryden,” he said. “And the X-29 was the subject of more technical papers by one of the Air Force Academy classes than anything else.” Visible in magazines, on television, and on static display at air shows (Dayton, Oshkosh), part of the X-29’s contribution was that it re-familiarized the public with X-planes. Technically, the forward-swept wing fighter proved