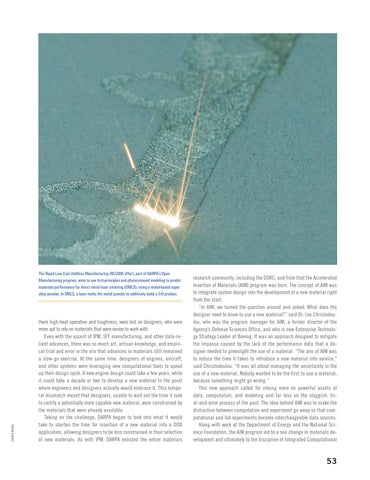 them high-heat operation and toughness, were lost on designers, who were more apt to rely on materials that were easier to work with. Even with the ascent of IPM, SFF manufacturing, and other data-reliant advances, there was so much art, artisan knowledge, and empirical trial and error in the mix that advances in materials still remained a slow-go exercise. At the same time, designers of engines, aircraft, and other systems were leveraging new computational tools to speed up their design cycle. A new engine design could take a few years, while it could take a decade or two to develop a new material to the point where engineers and designers actually would embrace it. This temporal mismatch meant that designers, unable to wait out the time it took to certify a potentially more capable new material, were constrained by the materials that were already available. Taking on the challenge, DARPA began to look into what it would take to shorten the time for insertion of a new material into a DOD application, allowing designers to be less constrained in their selection of new materials. As with IPM, DARPA enlisted the entire materials

research community, including the DSRC, and from that the Accelerated Insertion of Materials (AIM) program was born. The concept of AIM was to integrate system design into the development of a new material right from the start. “In AIM, we turned the question around and asked: What does the designer need to know to use a new material?” said Dr. Leo Christodoulou, who was the program manager for AIM, a former director of the Agency’s Defense Sciences Office, and who is now Enterprise Technology Strategy Leader at Boeing. It was an approach designed to mitigate the impasse caused by the lack of the performance data that a designer needed to greenlight the use of a material. “The aim of AIM was to reduce the time it takes to introduce a new material into service,” said Christodoulou. “It was all about managing the uncertainty in the use of a new material. Nobody wanted to be the first to use a material, because something might go wrong.” This new approach called for relying more on powerful assets of data, computation, and modeling and far less on the sluggish, trial-and-error process of the past. The idea behind AIM was to make the distinction between computation and experiment go away so that computational and lab experiments become interchangeable data sources. Along with work at the Department of Energy and the National Science Foundation, the AIM program led to a sea change in materials development and ultimately to the discipline of Integrated Computational