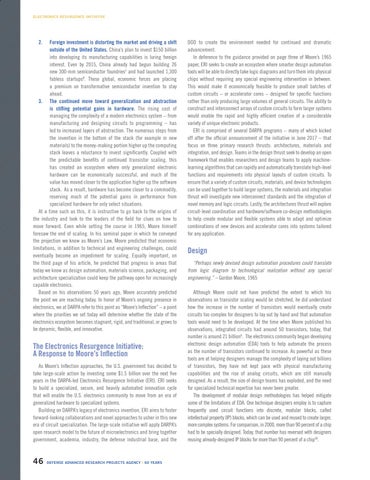 Foreign investment is distorting the market and driving a shift outside of the United States. China’s plan to invest $150 billion into developing its manufacturing capabilities is luring foreign interest. Even by 2015, China already had begun building 26 new 300-mm semiconductor foundries7 and had launched 1,300 fabless startups8. These global, economic forces are placing a premium on transformative semiconductor invention to stay ahead. 3. The continued move toward generalization and abstraction is stifling potential gains in hardware. The rising cost of managing the complexity of a modern electronics system – from manufacturing and designing circuits to programming – has led to increased layers of abstraction. The numerous steps from the invention in the bottom of the stack (for example in new materials) to the money-making portion higher up the computing stack leaves a reluctance to invest significantly. Coupled with the predictable benefits of continued transistor scaling, this has created an ecosystem where only generalized electronic hardware can be economically successful, and much of the value has moved closer to the application higher up the software stack. As a result, hardware has become closer to a commodity, reserving much of the potential gains in performance from specialized hardware for only select situations. At a time such as this, it is instructive to go back to the origins of the industry and look to the leaders of the field for clues on how to move forward. Even while setting the course in 1965, Moore himself foresaw the end of scaling. In his seminal paper in which he conveyed the projection we know as Moore’s Law, Moore predicted that economic limitations, in addition to technical and engineering challenges, could eventually become an impediment for scaling. Equally important, on the third page of his article, he predicted that progress in areas that today we know as design automation, materials science, packaging, and architecture specialization could keep the pathway open for increasingly capable electronics. Based on his observations 50 years ago, Moore accurately predicted the point we are reaching today. In honor of Moore’s ongoing presence in electronics, we at DARPA refer to this point as “Moore’s Inflection” – a point where the priorities we set today will determine whether the state of the electronics ecosystem becomes stagnant, rigid, and traditional, or grows to be dynamic, flexible, and innovative.

The Electronics Resurgence Initiative: A Response to Moore’s Inflection As Moore’s Inflection approaches, the U.S. government has decided to take large-scale action by investing some $1.5 billion over the next five years in the DARPA-led Electronics Resurgence Initiative (ERI). ERI seeks to build a specialized, secure, and heavily automated innovation cycle that will enable the U.S. electronics community to move from an era of generalized hardware to specialized systems. Building on DARPA’s legacy of electronics invention, ERI aims to foster forward-looking collaborations and novel approaches to usher in this new era of circuit specialization. The large-scale initiative will apply DARPA’s open research model to the future of microelectronics and bring together government, academia, industry, the defense industrial base, and the

DOD to create the environment needed for continued and dramatic advancement. In deference to the guidance provided on page three of Moore’s 1965 paper, ERI seeks to create an ecosystem where smarter design automation tools will be able to directly take logic diagrams and turn them into physical chips without requiring any special engineering intervention in between. This would make it economically feasible to produce small batches of custom circuits – or accelerator cores – designed for specific functions rather than only producing large volumes of general circuits. The ability to construct and interconnect arrays of custom circuits to form larger systems would enable the rapid and highly efficient creation of a considerable variety of unique electronic products. ERI is comprised of several DARPA programs – many of which kicked off after the official announcement of the initiative in June 2017 – that focus on three primary research thrusts: architectures, materials and integration, and design. Teams in the design thrust seek to develop an open framework that enables researchers and design teams to apply machinelearning algorithms that can rapidly and automatically translate high-level functions and requirements into physical layouts of custom circuits. To ensure that a variety of custom circuits, materials, and device technologies can be used together to build larger systems, the materials and integration thrust will investigate new interconnect standards and the integration of novel memory and logic circuits. Lastly, the architectures thrust will explore circuit-level coordination and hardware/software co-design methodologies to help create modular and flexible systems able to adapt and optimize combinations of new devices and accelerator cores into systems tailored for any application.

Design “Perhaps newly devised design automation procedures could translate from logic diagram to technological realization without any special engineering.” – Gordon Moore, 1965 Although Moore could not have predicted the extent to which his observations on transistor scaling would be stretched, he did understand how the increase in the number of transistors would eventually create circuits too complex for designers to lay out by hand and that automation tools would need to be developed. At the time when Moore published his observations, integrated circuits had around 50 transistors; today, that number is around 21 billion9. The electronics community began developing electronic design automation (EDA) tools to help automate the process as the number of transistors continued to increase. As powerful as these tools are at helping designers manage the complexity of laying out billions of transistors, they have not kept pace with physical manufacturing capabilities and the rise of analog circuits, which are still manually designed. As a result, the size of design teams has exploded, and the need for specialized technical expertise has never been greater. The development of modular design methodologies has helped mitigate some of the limitations of EDA. One technique designers employ is to capture frequently used circuit functions into discrete, modular blocks, called intellectual property (IP) blocks, which can be used and reused to create larger, more complex systems. For comparison, in 2000, more than 90 percent of a chip had to be specially designed. Today, that number has reversed with designers reusing already-designed IP blocks for more than 90 percent of a chip10.