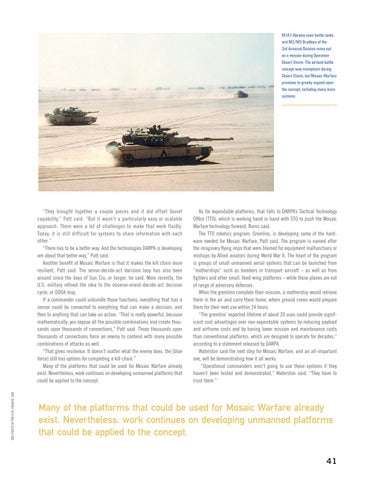 M1A1 Abrams main battle tanks and M2/M3 Bradleys of the 3rd Armored Division move out on a mission during Operation Desert Storm. The air-land battle concept was triumphant during Desert Storm, but Mosaic Warfare promises to greatly expand upon the concept, including many more systems.

“They brought together a couple pieces and it did offset Soviet capability,” Patt said. “But it wasn’t a particularly easy or scalable approach. There were a lot of challenges to make that work fluidly. Today, it is still difficult for systems to share information with each other.” “There has to be a better way. And the technologies DARPA is developing are about that better way,” Patt said. Another benefit of Mosaic Warfare is that it makes the kill chain more resilient, Patt said. The sense-decide-act decision loop has also been around since the days of Sun Tzu, or longer, he said. More recently, the U.S. military refined the idea to the observe-orient-decide-act decision cycle, or OODA loop. If a commander could unbundle those functions, everything that has a sensor could be connected to everything that can make a decision, and then to anything that can take an action. “That is really powerful, because mathematically, you expose all the possible combinations and create thousands upon thousands of connections,” Patt said. Those thousands upon thousands of connections force an enemy to contend with many possible combinations of attacks as well. “That gives resilience. It doesn’t matter what the enemy does, the [blue force] still has options for completing a kill chain.” Many of the platforms that could be used for Mosaic Warfare already exist. Nevertheless, work continues on developing unmanned platforms that could be applied to the concept.

As for expendable platforms, that falls to DARPA’s Tactical Technology Office (TTO), which is working hand in hand with STO to push the Mosaic Warfare technology forward, Burns said. The TTO robotics program, Gremlins, is developing some of the hardware needed for Mosaic Warfare, Patt said. The program is named after the imaginary flying imps that were blamed for equipment malfunctions or mishaps by Allied aviators during World War II. The heart of the program is groups of small unmanned aerial systems that can be launched from “motherships” such as bombers or transport aircraft – as well as from fighters and other small, fixed-wing platforms – while those planes are out of range of adversary defenses. When the gremlins complete their mission, a mothership would retrieve them in the air and carry them home, where ground crews would prepare them for their next use within 24 hours. “The gremlins’ expected lifetime of about 20 uses could provide significant cost advantages over non-expendable systems by reducing payload and airframe costs and by having lower mission and maintenance costs than conventional platforms, which are designed to operate for decades,” according to a statement released by DARPA. Waterston said the next step for Mosaic Warfare, and an all-important one, will be demonstrating how it all works. “Operational commanders aren’t going to use these systems if they haven’t been tested and demonstrated,” Waterston said. “They have to trust them.”