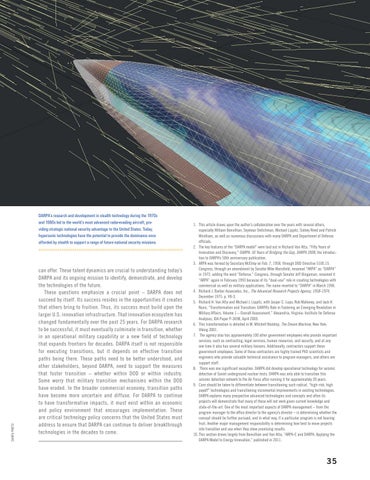 DARPA’s research and development in stealth technology during the 1970s and 1980s led to the world’s most advanced radar-evading aircraft, providing strategic national security advantage to the United States. Today, hypersonic technologies have the potential to provide the dominance once afforded by stealth to support a range of future national security missions.

can offer. These talent dynamics are crucial to understanding today’s DARPA and its ongoing mission to identify, demonstrate, and develop the technologies of the future. These questions emphasize a crucial point – DARPA does not succeed by itself. Its success resides in the opportunities it creates that others bring to fruition. Thus, its success must build upon the larger U.S. innovation infrastructure. That innovation ecosystem has changed fundamentally over the past 25 years. For DARPA research to be successful, it must eventually culminate in transition, whether in an operational military capability or a new field of technology that expands frontiers for decades. DARPA itself is not responsible for executing transitions, but it depends on effective transition paths being there. These paths need to be better understood, and other stakeholders, beyond DARPA, need to support the measures that foster transition – whether within DOD or within industry. Some worry that military transition mechanisms within the DOD have eroded. In the broader commercial economy, transition paths have become more uncertain and diffuse. For DARPA to continue to have transformative impacts, it must exist within an economic and policy environment that encourages implementation. These are critical technology policy concerns that the United States must address to ensure that DARPA can continue to deliver breakthrough technologies in the decades to come.

1. This article draws upon the author’s collaboration over the years with several others, especially William Bonvillian, Seymour Deitchman, Michael Lippitz, Sidney Reed and Patrick Windham, as well as numerous discussions with many DARPA and Department of Defense officials. 2. The key features of the “DARPA model” were laid out in Richard Van Atta, “Fifty Years of Innovation and Discovery,” DARPA: 50 Years of Bridging the Gap, DARPA 2008, the introduction to DARPA’s 50th anniversary publication. 3. ARPA was formed by Secretary McElroy on Feb. 7, 1958, through DOD Directive 5105.15. Congress, through an amendment by Senator Mike Mansfield, renamed “ARPA” as “DARPA” in 1972, adding the word “Defense.” Congress, through Senator Jeff Bingaman, renamed it “ARPA” again in February 1993 because of its “dual-use” role in creating technologies with commercial as well as military applications. The name reverted to “DARPA” in March 1996. 4. Richard J. Barber Associates, Inc., The Advanced Research Projects Agency, 1958-1974, December 1975. p. VII-3. 5. Richard H. Van Atta and Michael J. Lippitz, with Jasper C. Lupo, Rob Mahoney, and Jack H. Nunn, “Transformation and Transition: DARPA’s Role in Fostering an Emerging Revolution in Military Affairs, Volume 1 – Overall Assessment,” Alexandria, Virginia: Institute for Defense Analyses, IDA Paper P-3698, April 2003. 6. This transformation is detailed in M. Mitchell Waldrop, The Dream Machine, New York: Viking 2001. 7. The agency also has approximately 100 other government employees who provide important services, such as contracting, legal services, human resources, and security, and at any one time it also has several military liaisons. Additionally, contractors support these government employees. Some of these contractors are highly trained PhD scientists and engineers who provide valuable technical assistance to program managers, and others are support staff. 8. There was one significant exception. DARPA did develop operational technology for seismic detection of Soviet underground nuclear tests. DARPA was only able to transition this seismic detection network to the Air Force after running it for approximately 20 years. 9. Care should be taken to differentiate between transitioning such radical, “high-risk, high payoff” technologies and transitioning incremental improvements in existing technologies. DARPA explores many prospective advanced technologies and concepts and often its projects will demonstrate that many of these will not work given current knowledge and state-of-the-art. One of the most important aspects of DARPA management – from the program manager to the office director to the agency’s director – is determining whether the concept should be further pursued, and in what way, if a particular program is not bearing fruit. Another major management responsibility is determining how best to move projects into transition and use when they show promising results. 10. This section draws largely from Bonvillian and Van Atta, “ARPA-E and DARPA: Applying the DARPA Model to Energy Innovation,” published in 2011.