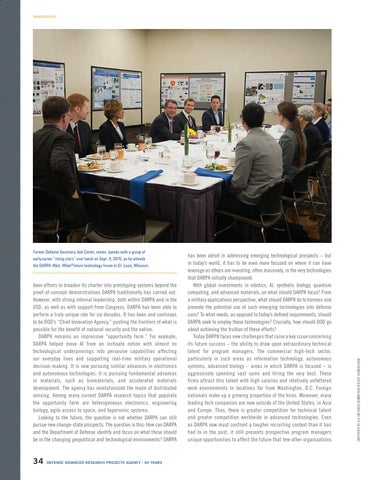 Former Defense Secretary Ash Carter, center, speaks with a group of early-career “rising stars” over lunch on Sept. 9, 2015, as he attends the DARPA Wait, What? future technology forum in St. Louis, Missouri.

been efforts to broaden its charter into prototyping systems beyond the proof-of-concept demonstrations DARPA traditionally has carried out. However, with strong internal leadership, both within DARPA and in the OSD, as well as with support from Congress, DARPA has been able to perform a truly unique role for six decades. It has been and continues to be DOD’s “Chief Innovation Agency,” pushing the frontiers of what is possible for the benefit of national security and the nation. DARPA remains an impressive “opportunity farm.” For example, DARPA helped move AI from an inchoate notion with almost no technological underpinnings into pervasive capabilities affecting our everyday lives and supporting real-time military operational decision-making. It is now pursuing similar advances in electronics and autonomous technologies. It is pursuing fundamental advances in materials, such as biomaterials, and accelerated materials development. The agency has revolutionized the realm of distributed sensing. Among many current DARPA research topics that populate the opportunity farm are heterogeneous electronics, engineering biology, agile access to space, and hypersonic systems. Looking to the future, the question is not whether DARPA can still pursue new change-state prospects. The question is this: How can DARPA and the Department of Defense identify and focus on what these should be in the changing geopolitical and technological environments? DARPA

has been adroit in addressing emerging technological prospects – but in today’s world, it has to be even more focused on where it can have leverage as others are investing, often massively, in the very technologies that DARPA initially championed. With global investments in robotics, AI, synthetic biology, quantum computing, and advanced materials, on what should DARPA focus? From a military applications perspective, what should DARPA do to harness and promote the potential use of such emerging technologies into defense uses? To what needs, as opposed to today’s defined requirements, should DARPA seek to employ these technologies? Crucially, how should DOD go about achieving the fruition of these efforts? Today DARPA faces new challenges that raise a key issue concerning its future success – the ability to draw upon extraordinary technical talent for program managers. The commercial high-tech sector, particularly in such areas as information technology, autonomous systems, advanced biology – areas in which DARPA is focused – is aggressively spending vast sums and hiring the very best. These firms attract this talent with high salaries and relatively unfettered work environments in locations far from Washington, D.C. Foreign nationals make up a growing proportion of the hires. Moreover, many leading tech companies are now outside of the United States, in Asia and Europe. Thus, there is greater competition for technical talent and greater competition worldwide in advanced technologies. Even as DARPA now must confront a tougher recruiting context than it has had to in the past, it still presents prospective program managers unique opportunities to affect the future that few other organizations