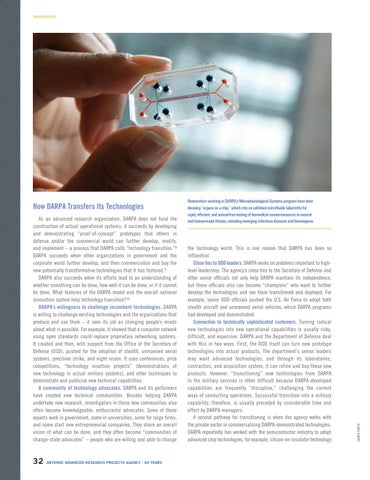 As an advanced research organization, DARPA does not fund the construction of actual operational systems; it succeeds by developing and demonstrating “proof-of-concept” prototypes that others in defense and/or the commercial world can further develop, modify, and implement – a process that DARPA calls “technology transition.”8 DARPA succeeds when other organizations in government and the corporate world further develop, and then commercialize and buy the new potentially transformative technologies that it has fostered.9 DARPA also succeeds when its efforts lead to an understanding of whether something can be done, how well it can be done, or if it cannot be done. What features of the DARPA model and the overall national innovation system help technology transition?10 DARPA’s willingness to challenge incumbent technologies. DARPA is willing to challenge existing technologies and the organizations that produce and use them – it sees its job as changing people’s minds about what is possible. For example, it showed that a computer network using open standards could replace proprietary networking systems. It created and then, with support from the Office of the Secretary of Defense (OSD), pushed for the adoption of stealth, unmanned aerial systems, precision strike, and night vision. It uses conferences, prize competitions, “technology insertion projects” (demonstrations of new technology in actual military systems), and other techniques to demonstrate and publicize new technical capabilities. A community of technology advocates. DARPA and its performers have created new technical communities. Besides helping DARPA undertake new research, investigators in these new communities also often become knowledgeable, enthusiastic advocates. Some of these experts work in government, some in universities, some for large firms, and some start new entrepreneurial companies. They share an overall vision of what can be done, and they often become “communities of change-state advocates” – people who are willing and able to change

Researchers working in DARPA’s Microphysiological Systems program have been devising “organs on a chip,” which rely on cell-lined microfluidic labyrinths for rapid, efficient, and animal-free testing of biomedical countermeasures to natural and human-made threats, including emerging infectious diseases and bioweapons.

the technology world. This is one reason that DARPA has been so influential. Close ties to DOD leaders. DARPA works on problems important to highlevel leadership. The agency’s close ties to the Secretary of Defense and other senior officials not only help DARPA maintain its independence, but these officials also can become “champions” who want to further develop the technologies and see them transitioned and deployed. For example, senior DOD officials pushed the U.S. Air Force to adopt both stealth aircraft and unmanned aerial vehicles, which DARPA programs had developed and demonstrated. Connection to technically sophisticated customers. Turning radical new technologies into new operational capabilities is usually risky, difficult, and expensive. DARPA and the Department of Defense deal with this in two ways. First, the DOD itself can turn new prototype technologies into actual products. The department’s senior leaders may want advanced technologies, and through its laboratories, contractors, and acquisition system, it can refine and buy these new products. However, “transitioning” new technologies from DARPA to the military services is often difficult because DARPA-developed capabilities are frequently “disruptive,” challenging the current ways of conducting operations. Successful transition into a military capability, therefore, is usually preceded by considerable time and effort by DARPA managers. A second pathway for transitioning is when the agency works with the private sector in commercializing DARPA-demonstrated technologies. DARPA repeatedly has worked with the semiconductor industry to adopt advanced chip technologies, for example, silicon-on-insulator technology

How DARPA Transfers Its Technologies