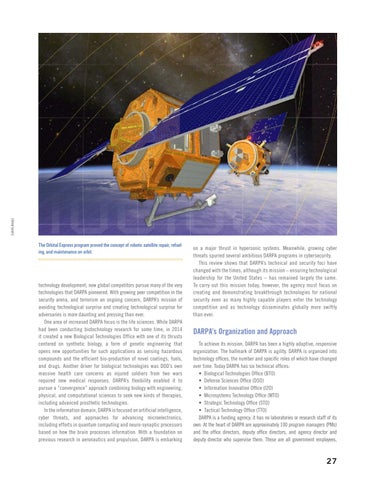 The Orbital Express program proved the concept of robotic satellite repair, refueling, and maintenance on orbit.

technology development; now global competitors pursue many of the very technologies that DARPA pioneered. With growing peer competition in the security arena, and terrorism an ongoing concern, DARPA’s mission of avoiding technological surprise and creating technological surprise for adversaries is more daunting and pressing than ever. One area of increased DARPA focus is the life sciences. While DARPA had been conducting biotechnology research for some time, in 2014 it created a new Biological Technologies Office with one of its thrusts centered on synthetic biology, a form of genetic engineering that opens new opportunities for such applications as sensing hazardous compounds and the efficient bio-production of novel coatings, fuels, and drugs. Another driver for biological technologies was DOD’s own massive health care concerns as injured soldiers from two wars required new medical responses. DARPA’s flexibility enabled it to pursue a “convergence” approach combining biology with engineering, physical, and computational sciences to seek new kinds of therapies, including advanced prosthetic technologies. In the information domain, DARPA is focused on artificial intelligence, cyber threats, and approaches for advancing microelectronics, including efforts in quantum computing and neuro-synaptic processors based on how the brain processes information. With a foundation on previous research in aeronautics and propulsion, DARPA is embarking

on a major thrust in hypersonic systems. Meanwhile, growing cyber threats spurred several ambitious DARPA programs in cybersecurity. This review shows that DARPA’s technical and security foci have changed with the times, although its mission – ensuring technological leadership for the United States – has remained largely the same. To carry out this mission today, however, the agency must focus on creating and demonstrating breakthrough technologies for national security even as many highly capable players enter the technology competition and as technology disseminates globally more swiftly than ever.

DARPA’s Organization and Approach To achieve its mission, DARPA has been a highly adaptive, responsive organization. The hallmark of DARPA is agility. DARPA is organized into technology offices, the number and specific roles of which have changed over time. Today DARPA has six technical offices: • Biological Technologies Office (BTO) • Defense Sciences Office (DSO) • Information Innovation Office (I2O) • Microsystems Technology Office (MTO) • Strategic Technology Office (STO) • Tactical Technology Office (TTO) DARPA is a funding agency; it has no laboratories or research staff of its own. At the heart of DARPA are approximately 100 program managers (PMs) and the office directors, deputy office directors, and agency director and deputy director who supervise them. These are all government employees,