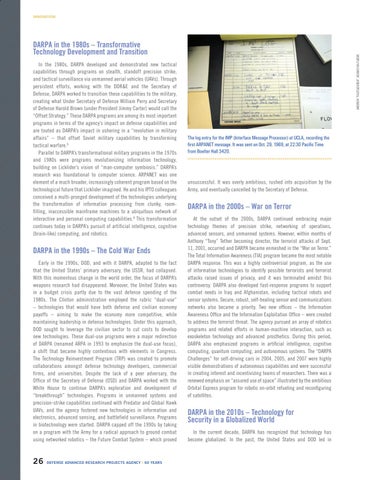 In the 1980s, DARPA developed and demonstrated new tactical capabilities through programs on stealth, standoff precision strike, and tactical surveillance via unmanned aerial vehicles (UAVs). Through persistent efforts, working with the DDR&E and the Secretary of Defense, DARPA worked to transition these capabilities to the military, creating what Under Secretary of Defense William Perry and Secretary of Defense Harold Brown (under President Jimmy Carter) would call the “Offset Strategy.” These DARPA programs are among its most important programs in terms of the agency’s impact on defense capabilities and are touted as DARPA’s impact in ushering in a “revolution in military affairs” – that offset Soviet military capabilities by transforming tactical warfare.5 Parallel to DARPA’s transformational military programs in the 1970s and 1980s were programs revolutionizing information technology, building on Licklider’s vision of “man-computer symbiosis.” DARPA’s research was foundational to computer science. ARPANET was one element of a much broader, increasingly coherent program based on the technological future that Licklider imagined. He and his IPTO colleagues conceived a multi-pronged development of the technologies underlying the transformation of information processing from clunky, roomfilling, inaccessible mainframe machines to a ubiquitous network of interactive and personal computing capabilities.6 This transformation continues today in DARPA’s pursuit of artificial intelligence, cognitive (brain-like) computing, and robotics.

DARPA in the 1990s – The Cold War Ends Early in the 1990s, DOD, and with it DARPA, adapted to the fact that the United States’ primary adversary, the USSR, had collapsed. With this momentous change in the world order, the focus of DARPA’s weapons research had disappeared. Moreover, the United States was in a budget crisis partly due to the vast defense spending of the 1980s. The Clinton administration employed the rubric “dual-use” – technologies that would have both defense and civilian economy payoffs – aiming to make the economy more competitive, while maintaining leadership in defense technologies. Under this approach, DOD sought to leverage the civilian sector to cut costs to develop new technologies. These dual-use programs were a major redirection of DARPA (renamed ARPA in 1993 to emphasize the dual-use focus), a shift that became highly contentious with elements in Congress. The Technology Reinvestment Program (TRP) was created to promote collaborations amongst defense technology developers, commercial firms, and universities. Despite the lack of a peer adversary, the Office of the Secretary of Defense (OSD) and DARPA worked with the White House to continue DARPA’s exploration and development of “breakthrough” technologies. Programs in unmanned systems and precision-strike capabilities continued with Predator and Global Hawk UAVs, and the agency fostered new technologies in information and electronics, advanced sensing, and battlefield surveillance. Programs in biotechnology were started. DARPA capped off the 1990s by taking on a program with the Army for a radical approach to ground combat using networked robotics – the Future Combat System – which proved

DARPA in the 1980s – Transformative Technology Development and Transition

The log entry for the IMP (Interface Message Processor) at UCLA, recording the first ARPANET message. It was sent on Oct. 29, 1969, at 22:30 Pacific Time from Boelter Hall 3420.

unsuccessful. It was overly ambitious, rushed into acquisition by the Army, and eventually cancelled by the Secretary of Defense.

DARPA in the 2000s – War on Terror At the outset of the 2000s, DARPA continued embracing major technology themes of precision strike, networking of operations, advanced sensors, and unmanned systems. However, within months of Anthony “Tony” Tether becoming director, the terrorist attacks of Sept. 11, 2001, occurred and DARPA became enmeshed in the “War on Terror.” The Total Information Awareness (TIA) program became the most notable DARPA response. This was a highly controversial program, as the use of information technologies to identify possible terrorists and terrorist attacks raised issues of privacy, and it was terminated amidst this controversy. DARPA also developed fast-response programs to support combat needs in Iraq and Afghanistan, including tactical robots and sensor systems. Secure, robust, self-healing sensor and communications networks also became a priority. Two new offices – the Information Awareness Office and the Information Exploitation Office – were created to address the terrorist threat. The agency pursued an array of robotics programs and related efforts in human-machine interaction, such as exoskeleton technology and advanced prosthetics. During this period, DARPA also emphasized programs in artificial intelligence, cognitive computing, quantum computing, and autonomous systems. The “DARPA Challenges” for self-driving cars in 2004, 2005, and 2007 were highly visible demonstrations of autonomous capabilities and were successful in creating interest and incentivizing teams of researchers. There was a renewed emphasis on “assured use of space” illustrated by the ambitious Orbital Express program for robotic on-orbit refueling and reconfiguring of satellites.

DARPA in the 2010s – Technology for Security in a Globalized World In the current decade, DARPA has recognized that technology has become globalized. In the past, the United States and DOD led in