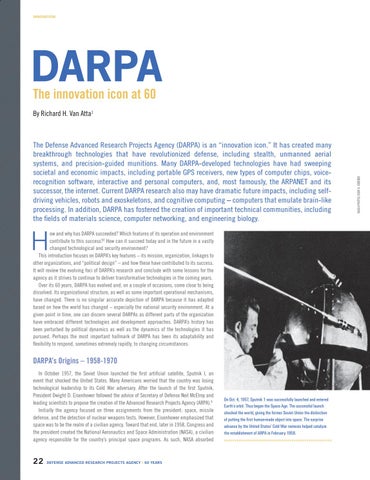 DARPA The innovation icon at 60

The Defense Advanced Research Projects Agency (DARPA) is an “innovation icon.” It has created many breakthrough technologies that have revolutionized defense, including stealth, unmanned aerial systems, and precision-guided munitions. Many DARPA-developed technologies have had sweeping societal and economic impacts, including portable GPS receivers, new types of computer chips, voicerecognition software, interactive and personal computers, and, most famously, the ARPANET and its successor, the internet. Current DARPA research also may have dramatic future impacts, including selfdriving vehicles, robots and exoskeletons, and cognitive computing – computers that emulate brain-like processing. In addition, DARPA has fostered the creation of important technical communities, including the fields of materials science, computer networking, and engineering biology.

ow and why has DARPA succeeded? Which features of its operation and environment contribute to this success?2 How can it succeed today and in the future in a vastly changed technological and security environment? This introduction focuses on DARPA’s key features – its mission, organization, linkages to other organizations, and “political design” – and how these have contributed to its success. It will review the evolving foci of DARPA’s research and conclude with some lessons for the agency as it strives to continue to deliver transformative technologies in the coming years. Over its 60 years, DARPA has evolved and, on a couple of occasions, come close to being dissolved. Its organizational structure, as well as some important operational mechanisms, have changed. There is no singular accurate depiction of DARPA because it has adapted based on how the world has changed – especially the national security environment. At a given point in time, one can discern several DARPAs as different parts of the organization have embraced different technologies and development approaches. DARPA’s history has been perturbed by political dynamics as well as the dynamics of the technologies it has pursued. Perhaps the most important hallmark of DARPA has been its adaptability and flexibility to respond, sometimes extremely rapidly, to changing circumstances.

DARPA’s Origins – 1958-1970 In October 1957, the Soviet Union launched the first artificial satellite, Sputnik I, an event that shocked the United States. Many Americans worried that the country was losing technological leadership to its Cold War adversary. After the launch of the first Sputnik, President Dwight D. Eisenhower followed the advice of Secretary of Defense Neil McElroy and leading scientists to propose the creation of the Advanced Research Projects Agency (ARPA).3 Initially the agency focused on three assignments from the president: space, missile defense, and the detection of nuclear weapons tests. However, Eisenhower emphasized that space was to be the realm of a civilian agency. Toward that end, later in 1958, Congress and the president created the National Aeronautics and Space Administration (NASA), a civilian agency responsible for the country’s principal space programs. As such, NASA absorbed

On Oct. 4, 1957, Sputnik 1 was successfully launched and entered Earth’s orbit. Thus began the Space Age. The successful launch shocked the world, giving the former Soviet Union the distinction of putting the first human-made object into space. The surprise advance by the United States’ Cold War nemesis helped catalyze the establishment of ARPA in February 1958.