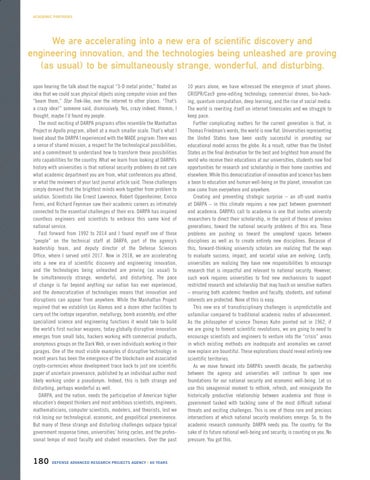 We are accelerating into a new era of scientific discovery and engineering innovation, and the technologies being unleashed are proving (as usual) to be simultaneously strange, wonderful, and disturbing. upon hearing the talk about the magical “3-D metal printer,” floated an idea that we could scan physical objects using computer vision and then “beam them,” Star Trek-like, over the internet to other places. “That’s a crazy idea!” someone said, dismissively. Yes, crazy indeed. Hmmm, I thought, maybe I’d found my people. The most exciting of DARPA programs often resemble the Manhattan Project or Apollo program, albeit at a much smaller scale. That’s what I loved about the DARPA I experienced with the MADE program: There was a sense of shared mission, a respect for the technological possibilities, and a commitment to understand how to transform these possibilities into capabilities for the country. What we learn from looking at DARPA’s history with universities is that national security problems do not care what academic department you are from, what conferences you attend, or what the reviewers of your last journal article said. These challenges simply demand that the brightest minds work together from problem to solution. Scientists like Ernest Lawrence, Robert Oppenheimer, Enrico Fermi, and Richard Feynman saw their academic careers as intimately connected to the essential challenges of their era. DARPA has inspired countless engineers and scientists to embrace this same kind of national service. Fast forward from 1992 to 2014 and I found myself one of those “people” on the technical staff at DARPA, part of the agency’s leadership team, and deputy director of the Defense Sciences Office, where I served until 2017. Now in 2018, we are accelerating into a new era of scientific discovery and engineering innovation, and the technologies being unleashed are proving (as usual) to be simultaneously strange, wonderful, and disturbing. The pace of change is far beyond anything our nation has ever experienced, and the democratization of technologies means that innovation and disruptions can appear from anywhere. While the Manhattan Project required that we establish Los Alamos and a dozen other facilities to carry out the isotope separation, metallurgy, bomb assembly, and other specialized science and engineering functions it would take to build the world’s first nuclear weapons, today globally disruptive innovation emerges from small labs, hackers working with commercial products, anonymous groups on the Dark Web, or even individuals working in their garages. One of the most visible examples of disruptive technology in recent years has been the emergence of the blockchain and associated crypto-currencies whose development trace back to just one scientific paper of uncertain provenance, published by an individual author most likely working under a pseudonym. Indeed, this is both strange and disturbing, perhaps wonderful as well. DARPA, and the nation, needs the participation of American higher education’s deepest thinkers and most ambitious scientists, engineers, mathematicians, computer scientists, modelers, and theorists, lest we risk losing our technological, economic, and geopolitical preeminence. But many of these strange and disturbing challenges outpace typical government response times, universities’ hiring cycles, and the professional tempo of most faculty and student researchers. Over the past

10 years alone, we have witnessed the emergence of smart phones. CRISPR/Cas9 gene-editing technology, commercial drones, bio-hacking, quantum computation, deep learning, and the rise of social media. The world is rewriting itself on internet timescales and we struggle to keep pace. Further complicating matters for the current generation is that, in Thomas Friedman’s words, the world is now flat. Universities representing the United States have been vastly successful in promoting our educational model across the globe. As a result, rather than the United States as the final destination for the best and brightest from around the world who receive their educations at our universities, students now find opportunities for research and scholarship in their home countries and elsewhere. While this democratization of innovation and science has been a boon to education and human well-being on the planet, innovation can now come from everywhere and anywhere. Creating and preventing strategic surprise – an oft-used mantra at DARPA – in this climate requires a new pact between government and academia. DARPA’s call to academia is one that invites university researchers to direct their scholarship, in the spirit of those of previous generations, toward the national security problems of this era. These problems are pushing us toward the unexplored spaces between disciplines as well as to create entirely new disciplines. Because of this, forward-thinking university scholars are realizing that the ways to evaluate success, impact, and societal value are evolving. Lastly, universities are realizing they have new responsibilities to encourage research that is impactful and relevant to national security. However, such work requires universities to find new mechanisms to support restricted research and scholarship that may touch on sensitive matters – ensuring both academic freedom and faculty, students, and national interests are protected. None of this is easy. This new era of transdisciplinary challenges is unpredictable and unfamiliar compared to traditional academic routes of advancement. As the philosopher of science Thomas Kuhn pointed out in 1962, if we are going to foment scientific revolutions, we are going to need to encourage scientists and engineers to venture into the “crisis” areas in which existing methods are inadequate and anomalies we cannot now explain are bountiful. These explorations should reveal entirely new scientific territories. As we move forward into DARPA’s seventh decade, the partnership between the agency and universities will continue to open new foundations for our national security and economic well-being. Let us use this sexagennial moment to rethink, refresh, and reinvigorate the historically productive relationship between academia and those in government tasked with tackling some of the most difficult national threats and exciting challenges. This is one of those rare and precious intersections at which national security revolutions emerge. So, to the academic research community: DARPA needs you. The country, for the sake of its future national well-being and security, is counting on you. No pressure. You got this.