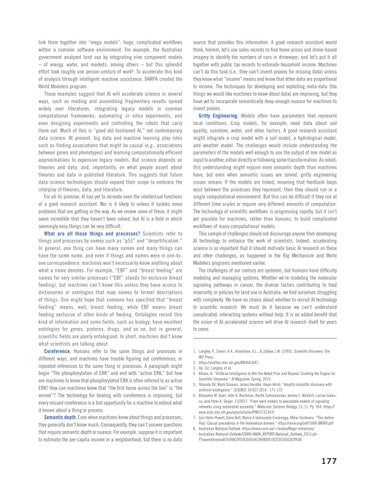 link them together into “mega models”: huge, complicated workflows within a common software environment. For example, the Australian government analyzed land use by integrating nine component models – of energy, water, and markets, among others – but this splendid effort took roughly one person-century of work8. To accelerate this kind of analysis through intelligent machine assistance, DARPA created the World Modelers program. These examples suggest that AI will accelerate science in several ways, such as reading and assembling fragmentary results spread widely over literatures, integrating legacy models in common computational frameworks, automating in silico experiments, and even designing experiments and controlling the robots that carry them out. Much of this is “good old-fashioned AI,” not contemporary data science. At present, big data and machine learning play roles such as finding associations that might be causal (e.g., associations between genes and phenotypes) and learning computationally efficient approximations to expensive legacy models. But science depends on theories and data, and, importantly, on what people assert about theories and data in published literature. This suggests that future data-science technologies should expand their scope to embrace the interplay of theories, data, and literature. For all its promise, AI has yet to recreate even the intellectual functions of a good research assistant. Nor is it likely to unless it tackles some problems that are getting in the way. As we review some of these, it might seem incredible that they haven’t been solved, but AI is a field in which seemingly easy things can be very difficult. What are all those things and processes? Scientists refer to things and processes by names such as “p53” and “desertification.” In general, one thing can have many names and many things can have the same name, and even if things and names were in one-toone correspondence, machines won’t necessarily know anything about what a name denotes. For example, “EBF” and “breast feeding” are names for very similar processes (“EBF” stands for exclusive breast feeding), but machines can’t know this unless they have access to dictionaries or ontologies that map names to formal descriptions of things. One might hope that someone has specified that “breast feeding” means, well, breast feeding, while EBF means breast feeding exclusive of other kinds of feeding. Ontologies record this kind of information and some fields, such as biology, have excellent ontologies for genes, proteins, drugs, and so on, but in general, scientific fields are poorly ontologized. In short, machines don’t know what scientists are talking about. Coreference. Humans refer to the same things and processes in different ways, and machines have trouble figuring out coreferences, or repeated references to the same thing or processes. A paragraph might begin “The phosphorylation of ERK” and end with “active ERK,” but how are machines to know that phosphorylated ERK is often referred to as active ERK? How can machines know that “the first horse across the line” is “the winner”? The technology for dealing with coreference is improving, but every missed coreference is a lost opportunity for a machine to extend what it knows about a thing or process. Semantic depth. Even when machines know about things and processes, they generally don’t know much. Consequently, they can’t answer questions that require semantic depth or nuance. For example, suppose it is important to estimate the per-capita income in a neighborhood, but there is no data

source that provides this information. A good research assistant would think, hmmm, let’s use sales records to find home prices and drone-based imagery to identify the numbers of cars in driveways, and let’s put it all together with public tax records to estimate household income. Machines can’t do this task (i.e., they can’t invent proxies for missing data) unless they know what “income” means and know that other data are proportional to income. The techniques for developing and exploiting meta-data (the things we would like machines to know about data) are improving, but they have yet to incorporate semantically deep-enough nuance for machines to invent proxies. Gritty Engineering. Models often have parameters that represent local conditions. Crop models, for example, need data about soil quality, sunshine, water, and other factors. A good research assistant might integrate a crop model with a soil model, a hydrological model, and weather model. The challenges would include understanding the parameters of the models well enough to use the output of one model as input to another, either directly or following some transformation. As noted, this understanding might require more semantic depth than machines have, but even when semantic issues are solved, gritty engineering issues remain: If the models are linked, meaning that feedback loops exist between the processes they represent, then they should run in a single computational environment. But this can be difficult if they run at different time scales or require very different amounts of computation. The technology of scientific workflows is progressing rapidly, but it isn’t yet possible for machines, rather than humans, to build complicated workflows of many computational models. This sample of challenges should not discourage anyone from developing AI technology to enhance the work of scientists. Indeed, accelerating science is so important that it should motivate basic AI research on these and other challenges, as happened in the Big Mechanism and World Modelers programs mentioned earlier. The challenges of our century are systemic, but humans have difficulty modeling and managing systems. Whether we’re modeling the molecular signaling pathways in cancer, the diverse factors contributing to food insecurity, or policies for land use in Australia, we find ourselves struggling with complexity. We have no choice about whether to recruit AI technology to scientific research: We must do it because we can’t understand complicated, interacting systems without help. It is an added benefit that the vision of AI-accelerated science will drive AI research itself for years to come.