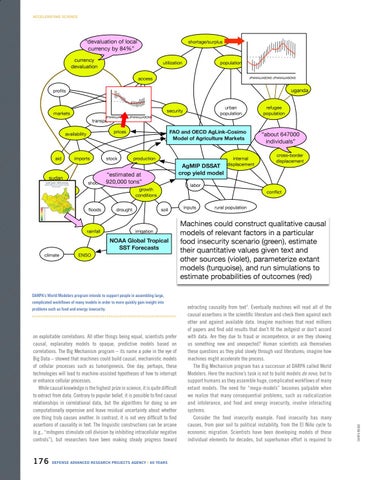 “devaluation of local currency by 84%”

DARPA’s World Modelers program intends to support people in assembling large, complicated workflows of many models in order to more quickly gain insight into problems such as food and energy insecurity.

on exploitable correlations. All other things being equal, scientists prefer causal, explanatory models to opaque, predictive models based on correlations. The Big Mechanism program – its name a poke in the eye of Big Data – showed that machines could build causal, mechanistic models of cellular processes such as tumorigenesis. One day, perhaps, these technologies will lead to machine-assisted hypotheses of how to interrupt or enhance cellular processes. While causal knowledge is the highest prize in science, it is quite difficult to extract from data. Contrary to popular belief, it is possible to find causal relationships in correlational data, but the algorithms for doing so are computationally expensive and leave residual uncertainty about whether one thing truly causes another. In contrast, it is not very difficult to find assertions of causality in text. The linguistic constructions can be arcane (e.g., “mitogens stimulate cell division by inhibiting intracellular negative controls”), but researchers have been making steady progress toward

extracting causality from text7. Eventually machines will read all of the causal assertions in the scientific literature and check them against each other and against available data. Imagine machines that read millions of papers and find odd results that don’t fit the zeitgeist or don’t accord with data. Are they due to fraud or incompetence, or are they showing us something new and unexpected? Human scientists ask themselves these questions as they plod slowly through vast literatures; imagine how machines might accelerate the process. The Big Mechanism program has a successor at DARPA called World Modelers. Here the machine’s task is not to build models de novo, but to support humans as they assemble huge, complicated workflows of many extant models. The need for “mega-models” becomes palpable when we realize that many consequential problems, such as radicalization and intolerance, and food and energy insecurity, involve interacting systems. Consider the food insecurity example. Food insecurity has many causes, from poor soil to political instability, from the El Niño cycle to economic migration. Scientists have been developing models of these individual elements for decades, but superhuman effort is required to