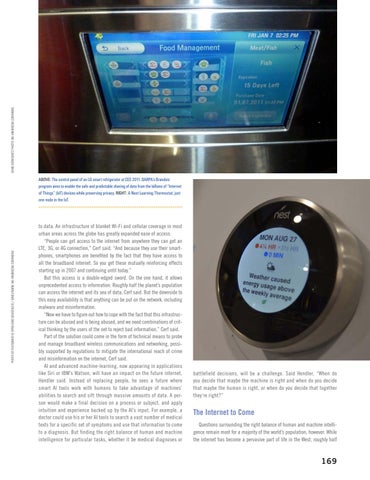 ABOVE: The control panel of an LG smart refrigerator at CES 2011. DARPA’s Brandeis program aims to enable the safe and predictable sharing of data from the billions of “Internet of Things” (IoT) devices while preserving privacy. RIGHT: A Nest Learning Thermostat, just one node in the IoT.

to data. An infrastructure of blanket Wi-Fi and cellular coverage in most urban areas across the globe has greatly expanded ease of access. “People can get access to the internet from anywhere they can get an LTE, 3G, or 4G connection,” Cerf said. “And because they use their smartphones, smartphones are benefited by the fact that they have access to all the broadband internet. So you get these mutually reinforcing effects starting up in 2007 and continuing until today.” But this access is a double-edged sword. On the one hand, it allows unprecedented access to information. Roughly half the planet’s population can access the internet and its sea of data, Cerf said. But the downside to this easy availability is that anything can be put on the network, including malware and misinformation. “Now we have to figure out how to cope with the fact that this infrastructure can be abused and is being abused, and we need combinations of critical thinking by the users of the net to reject bad information,” Cerf said. Part of the solution could come in the form of technical means to probe and manage broadband wireless communications and networking, possibly supported by regulations to mitigate the international reach of crime and misinformation on the internet, Cerf said. AI and advanced machine-learning, now appearing in applications like Siri or IBM’s Watson, will have an impact on the future internet, Hendler said. Instead of replacing people, he sees a future where smart AI tools work with humans to take advantage of machines’ abilities to search and sift through massive amounts of data. A person would make a final decision on a process or subject, and apply intuition and experience backed up by the AI’s input. For example, a doctor could use his or her AI tools to search a vast number of medical texts for a specific set of symptoms and use that information to come to a diagnosis. But finding the right balance of human and machine intelligence for particular tasks, whether it be medical diagnoses or

The Internet to Come Questions surrounding the right balance of human and machine intelligence remain moot for a majority of the world’s population, however. While the internet has become a pervasive part of life in the West, roughly half