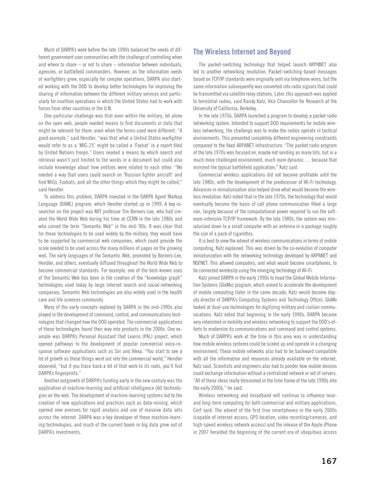 Much of DARPA’s work before the late 1990s balanced the needs of different government user communities with the challenge of controlling when and where to share – or not to share – information between individuals, agencies, or battlefield commanders. However, as the information needs of warfighters grew, especially for complex operations, DARPA also started working with the DOD to develop better technologies for improving the sharing of information between the different military services and particularly for coalition operations in which the United States had to work with forces from other countries or the U.N. One particular challenge was that even within the military, let alone on the open web, people needed means to find documents or data that might be relevant for them, even when the terms used were different. “A good example,” said Hendler, “was that what a United States warfighter would refer to as a ‘MIG-25’ might be called a ‘Foxbat’ in a report filed by United Nations troops.” Users needed a means by which search and retrieval wasn’t just limited to the words in a document but could also include knowledge about how entities were related to each other. “We needed a way that users could search on ‘Russian fighter aircraft’ and find MiGs, Foxbats, and all the other things which they might be called,” said Hendler. To address this problem, DARPA invested in the DARPA Agent Markup Language (DAML) program, which Hendler started up in 1999. A key researcher on the project was MIT professor Tim Berners-Lee, who had created the World Wide Web during his time at CERN in the late 1980s and who coined the term “Semantic Web” in the mid-’90s. It was clear that for these technologies to be used widely by the military, they would have to be supported by commercial web companies, which could provide the scale needed to be used across the many millions of pages on the growing web. The early languages of the Semantic Web, promoted by Berners-Lee, Hendler, and others, eventually diffused throughout the World Wide Web to become commercial standards. For example, one of the best-known uses of the Semantic Web has been in the creation of the “knowledge graph” technologies used today by large internet search and social-networking companies. Semantic Web technologies are also widely used in the health care and life sciences community Many of the early concepts explored by DARPA in the mid-1990s also played in the development of command, control, and communications technologies that changed how the DOD operated. The commercial applications of these technologies found their way into products in the 2000s. One example was DARPA’s Personal Assistant that Learns (PAL) project, which opened pathways to the development of popular commercial voice-response software applications such as Siri and Alexa. “You start to see a lot of growth as these things went out into the commercial world,” Hendler observed, “but if you trace back a lot of that work to its roots, you’ll find DARPA’s fingerprints.” Another outgrowth of DARPA’s funding early in the new century was the application of machine-learning and artificial intelligence (AI) technologies on the web. The development of machine-learning systems led to the creation of new applications and practices such as data-mining, which opened new avenues for rapid analysis and use of massive data sets across the internet. DARPA was a key developer of these machine-learning technologies, and much of the current boom in big data grew out of DARPA’s investments.

The Wireless Internet and Beyond The packet-switching technology that helped launch ARPANET also led to another networking revolution. Packet-switching-based messages based on TCP/IP standards were originally sent via telephone wires, but the same information subsequently was converted into radio signals that could be transmitted via satellite relay stations. Later, this approach was applied to terrestrial radios, said Randy Katz, Vice Chancellor for Research at the University of California, Berkeley. In the late 1970s, DARPA launched a program to develop a packet radio networking system. Intended to support DOD requirements for mobile wireless networking, the challenge was to make the radios operate in tactical environments. This presented completely different engineering constraints compared to the fixed ARPANET infrastructure. “The packet radio program of the late 1970s was focused on, maybe not sending as many bits, but in a much more challenged environment, much more dynamic … because that mirrored the typical battlefield application,” Katz said. Commercial wireless applications did not become profitable until the late 1980s, with the development of the predecessor of Wi-Fi technology. Advances in miniaturization also helped drive what would become the wireless revolution. Katz noted that in the late 1970s, the technology that would eventually become the basis of cell phone communication filled a large van, largely because of the computational power required to run the software-intensive TCP/IP framework. By the late 1980s, the system was miniaturized down to a small computer with an antenna in a package roughly the size of a pack of cigarettes. It is best to view the advent of wireless communications in terms of mobile computing, Katz explained. This was driven by the co-evolution of computer miniaturization with the networking technology developed by ARPANET and NSFNET. This allowed computers, and what would become smartphones, to be connected wirelessly using the emerging technology of Wi-Fi. Katz joined DARPA in the early 1990s to head the Global Mobile Information Systems (GloMo) program, which aimed to accelerate the development of mobile computing (later in the same decade, Katz would become deputy director of DARPA’s Computing Systems and Technology Office). GloMo looked at dual-use technologies for digitizing military and civilian communications. Katz noted that beginning in the early 1990s, DARPA became very interested in mobility and wireless networking to support the DOD’s efforts to modernize its communications and command and control systems. Much of DARPA’s work at the time in this area was in understanding how mobile wireless systems could be scaled up and operate in a changing environment. These mobile networks also had to be backward compatible with all the information and resources already available on the internet, Katz said. Scientists and engineers also had to ponder how mobile devices could exchange information without a centralized network or set of servers. “All of these ideas really blossomed in the time frame of the late 1990s into the early 2000s,” he said. Wireless networking and broadband will continue to influence nearand long-term computing for both commercial and military applications, Cerf said. The advent of the first true smartphones in the early 2000s (capable of internet access, GPS location, video recording/cameras, and high-speed wireless network access) and the release of the Apple iPhone in 2007 heralded the beginning of the current era of ubiquitous access