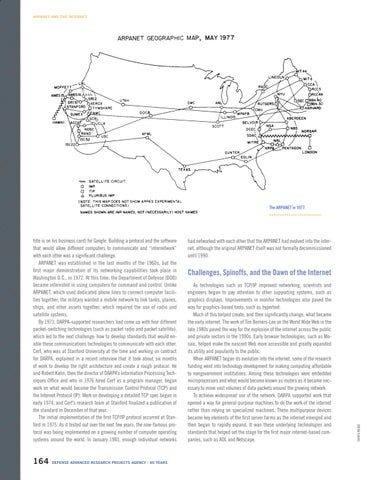 ARPANET AND THE INTERNET

had networked with each other that the ARPANET had evolved into the internet, although the original ARPANET itself was not formally decommissioned until 1990.

Challenges, Spinoffs, and the Dawn of the Internet As technologies such as TCP/IP improved networking, scientists and engineers began to pay attention to other supporting systems, such as graphics displays. Improvements in monitor technologies also paved the way for graphics-based tools, such as hypertext. Much of this helped create, and then significantly change, what became the early internet. The work of Tim Berners-Lee on the World Wide Web in the late 1980s paved the way for the explosion of the internet across the public and private sectors in the 1990s. Early browser technologies, such as Mosaic, helped make the nascent Web more accessible and greatly expanded its utility and popularity to the public. When ARPANET began its evolution into the internet, some of the research funding went into technology development for making computing affordable to nongovernment institutions. Among these technologies were embedded microprocessors and what would become known as routers as it became necessary to move vast volumes of data packets around the growing network. To achieve widespread use of the network, DARPA supported work that opened a way for general-purpose machines to do the work of the internet rather than relying on specialized machines. These multipurpose devices became key elements of the first server farms as the internet emerged and then began to rapidly expand. It was these underlying technologies and standards that helped set the stage for the first major internet-based companies, such as AOL and Netscape.

title is on his business card) for Google. Building a protocol and the software that would allow different computers to communicate and “internetwork” with each other was a significant challenge. ARPANET was established in the last months of the 1960s, but the first major demonstration of its networking capabilities took place in Washington D.C., in 1972. At this time, the Department of Defense (DOD) became interested in using computers for command and control. Unlike ARPANET, which used dedicated phone lines to connect computer facilities together, the military wanted a mobile network to link tanks, planes, ships, and other assets together, which required the use of radio and satellite systems. By 1973, DARPA-supported researchers had come up with four different packet-switching technologies (such as packet radio and packet satellite), which led to the next challenge: how to develop standards that would enable these communications technologies to communicate with each other. Cerf, who was at Stanford University at the time and working on contract for DARPA, explained in a recent interview that it took about six months of work to develop the right architecture and create a rough protocol. He and Robert Kahn, then the director of DARPA’s Information Processing Techniques Office and who in 1976 hired Cerf as a program manager, began work on what would become the Transmission Control Protocol (TCP) and the Internet Protocol (IP). Work on developing a detailed TCP spec began in early 1974, and Cerf’s research team at Stanford finalized a publication of the standard in December of that year. The initial implementation of the first TCP/IP protocol occurred at Stanford in 1975. As it tested out over the next few years, the now-famous protocol was being implemented on a growing number of computer operating systems around the world. In January 1983, enough individual networks