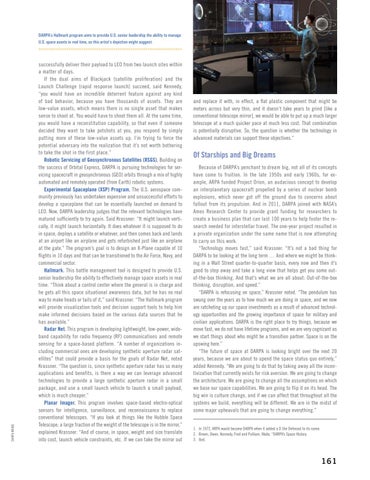 successfully deliver their payload to LEO from two launch sites within a matter of days. If the dual aims of Blackjack (satellite proliferation) and the Launch Challenge (rapid response launch) succeed, said Kennedy, “you would have an incredible deterrent feature against any kind of bad behavior, because you have thousands of assets. They are low-value assets, which means there is no single asset that makes sense to shoot at. You would have to shoot them all. At the same time, you would have a reconstitution capability, so that even if someone decided they want to take potshots at you, you respond by simply putting more of these low-value assets up. I’m trying to force the potential adversary into the realization that it’s not worth bothering to take the shot in the first place.” Robotic Servicing of Geosynchronous Satellites (RSGS). Building on the success of Orbital Express, DARPA is pursuing technologies for servicing spacecraft in geosynchronous (GEO) orbits through a mix of highly automated and remotely operated (from Earth) robotic systems. Experimental Spaceplane (XSP) Program. The U.S. aerospace community previously has undertaken expensive and unsuccessful efforts to develop a spaceplane that can be essentially launched on demand to LEO. Now, DARPA leadership judges that the relevant technologies have matured sufficiently to try again. Said Krassner: “It might launch vertically, it might launch horizontally. It does whatever it is supposed to do in space, deploys a satellite or whatever, and then comes back and lands at an airport like an airplane and gets refurbished just like an airplane at the gate.” The program’s goal is to design an X-Plane capable of 10 flights in 10 days and that can be transitioned to the Air Force, Navy, and commercial sector. Hallmark. This battle management tool is designed to provide U.S. senior leadership the ability to effectively manage space assets in real time. “Think about a control center where the general is in charge and he gets all this space situational awareness data, but he has no real way to make heads or tails of it,” said Krassner. “The Hallmark program will provide visualization tools and decision support tools to help him make informed decisions based on the various data sources that he has available.” Radar Net. This program is developing lightweight, low-power, wideband capability for radio frequency (RF) communications and remote sensing for a space-based platform. “A number of organizations including commercial ones are developing synthetic aperture radar satellites” that could provide a basis for the goals of Radar Net, noted Krassner. “The question is, since synthetic aperture radar has so many applications and benefits, is there a way we can leverage advanced technologies to provide a large synthetic aperture radar in a small package, and use a small launch vehicle to launch a small payload, which is much cheaper.” Planar Imager. This program involves space-based electro-optical sensors for intelligence, surveillance, and reconnaissance to replace conventional telescopes. “If you look at things like the Hubble Space Telescope, a large fraction of the weight of the telescope is in the mirror,” explained Krassner. “And of course, in space, weight and size translate into cost, launch vehicle constraints, etc. If we can take the mirror out

and replace it with, in effect, a flat plastic component that might be meters across but very thin, and it doesn’t take years to grind [like a conventional telescope mirror], we would be able to put up a much larger telescope at a much quicker pace at much less cost. That combination is potentially disruptive. So, the question is whether the technology in advanced materials can support these objectives.”

Of Starships and Big Dreams

Because of DARPA’s penchant to dream big, not all of its concepts have come to fruition. In the late 1950s and early 1960s, for example, ARPA funded Project Orion, an audacious concept to develop an interplanetary spacecraft propelled by a series of nuclear bomb explosions, which never got off the ground due to concerns about fallout from its propulsion. And in 2011, DARPA joined with NASA’s Ames Research Center to provide grant funding for researchers to create a business plan that can last 100 years to help foster the research needed for interstellar travel. The one-year project resulted in a private organization under the same name that is now attempting to carry on this work. “Technology moves fast,” said Krassner. “It’s not a bad thing for DARPA to be looking at the long term … And where we might be thinking in a Wall Street quarter-to-quarter basis, every now and then it’s good to step away and take a long view that helps get you some outof-the-box thinking. And that’s what we are all about: Out-of-the-box thinking, disruption, and speed.” “DARPA is refocusing on space,” Krassner noted. “The pendulum has swung over the years as to how much we are doing in space, and we now are ratcheting up our space investments as a result of advanced technology opportunities and the growing importance of space for military and civilian applications. DARPA is the right place to try things, because we move fast, we do not have lifetime programs, and we are very cognizant as we start things about who might be a transition partner. Space is on the upswing here.” “The future of space at DARPA is looking bright over the next 20 years, because we are about to upend the space status quo entirely,” added Kennedy. “We are going to do that by taking away all the incentivization that currently exists for risk aversion. We are going to change the architecture. We are going to change all the assumptions on which we base our space capabilities. We are going to flip it on its head. The big win is culture change, and if we can affect that throughout all the systems we build, everything will be different. We are in the midst of some major upheavals that are going to change everything.” 1. In 1972, ARPA would become DARPA when it added a D (for Defense) to its name. 2. Brown, Owen, Kennedy, Fred and Pulliam, Wade, “DARPA’s Space History. 3. Ibid.