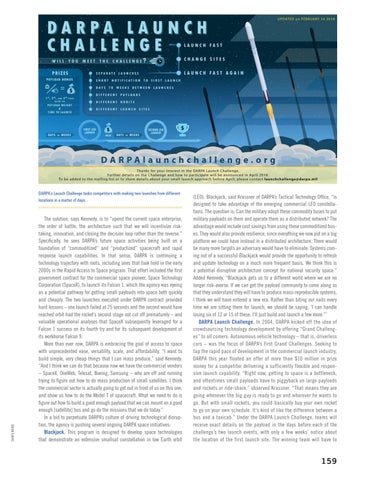 The solution, says Kennedy, is to “upend the current space enterprise, the order of battle, the architecture such that we will incentivize risktaking, innovation, and closing the decision loop rather than the reverse.” Specifically, he sees DARPA’s future space activities being built on a foundation of “commoditized” and “productized” spacecraft and rapid response launch capabilities. In that sense, DARPA is continuing a technology trajectory with roots, including ones that took hold in the early 2000s in the Rapid Access to Space program. That effort included the first government contract for the commercial space pioneer, Space Technology Corporation (SpaceX), to launch its Falcon 1, which the agency was eyeing as a potential pathway for getting small payloads into space both quickly and cheaply. The two launches executed under DARPA contract provided hard lessons – one launch failed at 25 seconds and the second would have reached orbit had the rocket’s second stage not cut off prematurely – and valuable operational analyses that SpaceX subsequently leveraged for a Falcon 1 success on its fourth try and for its subsequent development of its workhorse Falcon 9. More than ever now, DARPA is embracing the goal of access to space with unprecedented ease, versatility, scale, and affordability. “I want to build simple, very cheap things that I can mass produce,” said Kennedy. “And I think we can do that because now we have the commercial vendors – SpaceX, OneWeb, Telesat, Boeing, Samsung – who are off and running trying to figure out how to do mass production of small satellites. I think the commercial sector is actually going to get out in front of us on this one, and show us how to do the Model T of spacecraft. What we need to do is figure out how to build a good enough payload that we can mount on a good enough [satellite] bus and go do the missions that we do today.” In a bid to perpetuate DARPA’s culture of driving technological disruption, the agency is pushing several ongoing DARPA space initiatives: Blackjack. This program is designed to develop space technologies that demonstrate an extensive smallsat constellation in low Earth orbit

(LEO). Blackjack, said Krassner of DARPA’s Tactical Technology Office, “is designed to take advantage of the emerging commercial LEO constellations. The question is: Can the military adopt these commodity buses to put military payloads on them and operate them as a distributed network? The advantage would include cost savings from using these commoditized buses. They would also provide resilience, since everything we now put on a big platform we could have instead in a distributed architecture. There would be many more targets an adversary would have to eliminate. Systems coming out of a successful Blackjack would provide the opportunity to refresh and update technology on a much more frequent basis. We think this is a potential disruptive architecture concept for national security space.” Added Kennedy, “Blackjack gets us to a different world where we are no longer risk-averse. If we can get the payload community to come along so that they understand they will have to produce mass-reproducible systems, I think we will have entered a new era. Rather than biting our nails every time we are sitting there for launch, we should be saying, ‘I can handle losing six of 12 or 15 of these. I’ll just build and launch a few more.’” DARPA Launch Challenge. In 2004, DARPA kicked off the idea of crowdsourcing technology development by offering “Grand Challenges” to all comers. Autonomous vehicle technology – that is, driverless cars – was the focus of DARPA’s first Grand Challenges. Seeking to tap the rapid pace of development in the commercial launch industry, DARPA this year floated an offer of more than $10 million in prize money for a competitor delivering a sufficiently flexible and responsive launch capability. “Right now, getting to space is a bottleneck, and oftentimes small payloads have to piggyback on large payloads and rockets or ride-share,” observed Krassner. “That means they are going whenever the big guy is ready to go and wherever he wants to go. But with small rockets, you could basically buy your own rocket to go on your own schedule. It’s kind of like the difference between a bus and a taxicab.” Under the DARPA Launch Challenge, teams will receive exact details on the payload in the days before each of the challenge’s two launch events, with only a few weeks’ notice about the location of the first launch site. The winning team will have to