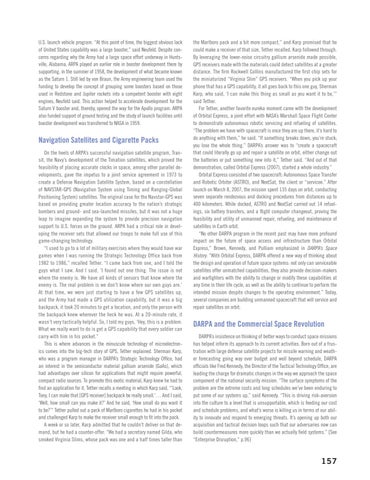 U.S. launch vehicle program. “At this point of time, the biggest obvious lack of United States capability was a large booster,” said Neufeld. Despite concerns regarding why the Army had a large space effort underway in Huntsville, Alabama, ARPA played an earlier role in booster development there by supporting, in the summer of 1958, the development of what became known as the Saturn 1. Still led by von Braun, the Army engineering team used the funding to develop the concept of grouping some boosters based on those used in Redstone and Jupiter rockets into a competent booster with eight engines, Neufeld said. This action helped to accelerate development for the Saturn V booster and, thereby, opened the way for the Apollo program. ARPA also funded support of ground testing and the study of launch facilities until booster development was transferred to NASA in 1959.

On the heels of ARPA’s successful navigation satellite program, Transit, the Navy’s development of the Timation satellites, which proved the feasibility of placing accurate clocks in space, among other parallel developments, gave the impetus to a joint service agreement in 1973 to create a Defense Navigation Satellite System, based on a constellation of NAVSTAR-GPS (Navigation System using Timing and Ranging-Global Positioning System) satellites. The original case for the Navstar-GPS was based on providing greater location accuracy to the nation’s strategic bombers and ground- and sea-launched missiles, but it was not a huge leap to imagine expanding the system to provide precision navigation support to U.S. forces on the ground. ARPA had a critical role in developing the receiver sets that allowed our troops to make full use of this game-changing technology. “I used to go to a lot of military exercises where they would have war games when I was running the Strategic Technology Office back from 1982 to 1986,” recalled Tether. “I came back from one, and I told the guys what I saw. And I said, ‘I found out one thing. The issue is not where the enemy is. We have all kinds of sensors that know where the enemy is. The real problem is we don’t know where our own guys are.’ At that time, we were just starting to have a few GPS satellites up, and the Army had made a GPS utilization capability, but it was a big backpack, it took 20 minutes to get a location, and only the person with the backpack knew wherever the heck he was. At a 20-minute rate, it wasn’t very tactically helpful. So, I told my guys, ‘Hey, this is a problem. What we really want to do is get a GPS capability that every soldier can carry with him in his pocket.” This is where advances in the minuscule technology of microelectronics comes into the big-tech story of GPS, Tether explained. Sherman Karp, who was a program manager in DARPA’s Strategic Technology Office, had an interest in the semiconductor material gallium arsenide (GaAs), which had advantages over silicon for applications that might require powerful, compact radio sources. To promote this exotic material, Karp knew he had to find an application for it. Tether recalls a meeting in which Karp said, “’Look, Tony, I can make that [GPS receiver] backpack be really small.’… And I said, ‘Well, how small can you make it?’ And he said, ‘How small do you want it to be?’” Tether pulled out a pack of Marlboro cigarettes he had in his pocket and challenged Karp to make the receiver small enough to fit into the pack. A week or so later, Karp admitted that he couldn’t deliver on that demand, but he had a counter-offer. “We had a secretary named Gilda, who smoked Virginia Slims, whose pack was one and a half times taller than

the Marlboro pack and a bit more compact,” and Karp promised that he could make a receiver of that size, Tether recalled. Karp followed through. By leveraging the lower-noise circuitry gallium arsenide made possible, GPS receivers made with the materials could detect satellites at a greater distance. The firm Rockwell Collins manufactured the first chip sets for the miniaturized “Virginia Slim” GPS receivers. “When you pick up your phone that has a GPS capability, it all goes back to this one guy, Sherman Karp, who said, ‘I can make this thing as small as you want it to be,’” said Tether. For Tether, another favorite eureka moment came with the development of Orbital Express, a joint effort with NASA’s Marshall Space Flight Center to demonstrate autonomous robotic servicing and refueling of satellites. “The problem we have with spacecraft is once they are up there, it’s hard to do anything with them,” he said. “If something breaks down, you’re stuck; you lose the whole thing.” DARPA’s answer was to “create a spacecraft that could literally go up and repair a satellite on orbit, either change out the batteries or put something new into it,” Tether said. “And out of that demonstration, called Orbital Express (2007), started a whole industry.” Orbital Express consisted of two spacecraft: Autonomous Space Transfer and Robotic Orbiter (ASTRO), and NextSat, the client or “servicee.” After launch on March 8, 2007, the mission spent 135 days on orbit, conducting seven separate rendezvous and docking procedures from distances up to 400 kilometers. While docked, ASTRO and NextSat carried out 14 refuelings, six battery transfers, and a flight computer changeout, proving the feasibility and utility of unmanned repair, refueling, and maintenance of satellites in Earth orbit. “No other DARPA program in the recent past may have more profound impact on the future of space access and infrastructure than Orbital Express,” Brown, Kennedy, and Pulliam emphasized in DARPA’s Space History. “With Orbital Express, DARPA offered a new way of thinking about the design and operation of future space systems: not only can serviceable satellites offer unmatched capabilities, they also provide decision-makers and warfighters with the ability to change or modify these capabilities at any time in their life cycle, as well as the ability to continue to perform the intended mission despite changes to the operating environment.” Today, several companies are building unmanned spacecraft that will service and repair satellites on orbit.

DARPA and the Commercial Space Revolution

DARPA’s insistence on thinking of better ways to conduct space missions has helped inform its approach to its current activities. Born out of a frustration with large defense satellite projects for missile warning and weather forecasting going way over budget and well beyond schedule, DARPA officials like Fred Kennedy, the Director of the Tactical Technology Office, are leading the charge for dramatic changes in the way we approach the space component of the national security mission. “The surface symptoms of the problem are the extreme costs and long schedules we’ve been enduring to put some of our systems up,” said Kennedy. “This is driving risk-aversion into the culture to a level that is unsupportable, which is feeding our cost and schedule problems, and what’s worse is killing us in terms of our ability to innovate and respond to emerging threats. It’s opening up both our acquisition and tactical decision loops such that our adversaries now can build countermeasures more quickly than we actually field systems.” [See “Enterprise Disruption,” p.96]