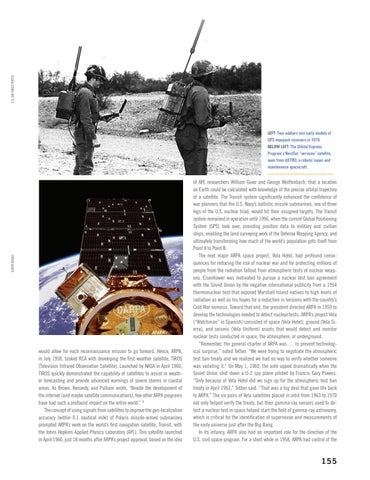 would allow for each reconnaissance mission to go forward. Hence, ARPA, in July 1958, tasked RCA with developing the first weather satellite, TIROS (Television Infrared Observation Satellite). Launched by NASA in April 1960, TIROS quickly demonstrated the capability of satellites to assist in weather forecasting and provide advanced warnings of severe storms in coastal areas. As Brown, Kennedy, and Pulliam wrote, “Beside the development of the internet (and maybe satellite communications), few other ARPA programs have had such a profound impact on the entire world.” 3 The concept of using signals from satellites to improve the geo-localization accuracy (within 0.1 nautical mile) of Polaris missile-armed submarines prompted ARPA’s work on the world’s first navigation satellite, Transit, with the Johns Hopkins Applied Physics Laboratory (APL). This satellite launched in April 1960, just 18 months after ARPA’s project approval, based on the idea

of APL researchers William Guier and George Weiffenbach, that a location on Earth could be calculated with knowledge of the precise orbital trajectory of a satellite. The Transit system significantly enhanced the confidence of war planners that the U.S. Navy’s ballistic missile submarines, one of three legs of the U.S. nuclear triad, would hit their assigned targets. The Transit system remained in operation until 1996, when the current Global Positioning System (GPS) took over, providing position data to military and civilian ships, enabling the land surveying work of the Defense Mapping Agency, and ultimately transforming how much of the world’s population gets itself from Point A to Point B. The next major ARPA space project, Vela Hotel, had profound consequences for reducing the risk of nuclear war and for protecting millions of people from the radiation fallout from atmospheric tests of nuclear weapons. Eisenhower was motivated to pursue a nuclear test ban agreement with the Soviet Union by the negative international publicity from a 1954 thermonuclear test that exposed Marshall Island natives to high levels of radiation as well as his hopes for a reduction in tensions with the country’s Cold War nemesis. Toward that end, the president directed ARPA in 1959 to develop the technologies needed to detect nuclear tests. ARPA’s project Vela (“Watchman” in Spanish) consisted of space (Vela Hotel), ground (Vela Sierra), and seismic (Vela Uniform) assets that would detect and monitor nuclear tests conducted in space, the atmosphere, or underground. “Remember, the general charter of ARPA was … to prevent technological surprise,” noted Tether. “We were trying to negotiate the atmospheric test ban treaty and we realized we had no way to verify whether someone was violating it.” On May 1, 1960, the ante upped dramatically when the Soviet Union shot down a U-2 spy plane piloted by Francis Gary Powers. “Only because of Vela Hotel did we sign up for the atmospheric test ban treaty in April 1963,” Tether said. “That was a big deal that gave life back to ARPA.” The six pairs of Vela satellites placed in orbit from 1963 to 1970 not only helped verify the treaty, but their gamma-ray sensors used to detect a nuclear test in space helped start the field of gamma-ray astronomy, which is critical for the identification of supernovae and measurements of the early universe just after the Big Bang. In its infancy, ARPA also had an important role for the direction of the U.S. civil space program. For a short while in 1958, ARPA had control of the