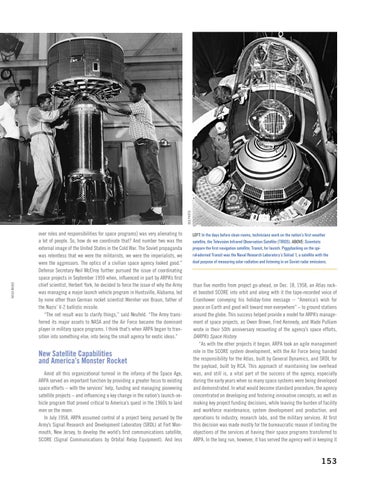 over roles and responsibilities for space programs] was very alienating to a lot of people. So, how do we coordinate that? And number two was the external image of the United States in the Cold War. The Soviet propaganda was relentless that we were the militarists, we were the imperialists, we were the aggressors. The optics of a civilian space agency looked good.” Defense Secretary Neil McElroy further pursued the issue of coordinating space projects in September 1959 when, influenced in part by ARPA’s first chief scientist, Herbert York, he decided to force the issue of why the Army was managing a major launch vehicle program in Huntsville, Alabama, led by none other than German rocket scientist Wernher von Braun, father of the Nazis’ V-2 ballistic missile. “The net result was to clarify things,” said Neufeld. “The Army transferred its major assets to NASA and the Air Force became the dominant player in military space programs. I think that’s when ARPA began to transition into something else, into being the small agency for exotic ideas.”

New Satellite Capabilities and America’s Monster Rocket Amid all this organizational turmoil in the infancy of the Space Age, ARPA served an important function by providing a greater focus to existing space efforts – with the services’ help, funding and managing pioneering satellite projects – and influencing a key change in the nation’s launch-vehicle program that proved critical to America’s quest in the 1960s to land men on the moon. In July 1958, ARPA assumed control of a project being pursued by the Army’s Signal Research and Development Laboratory (SRDL) at Fort Monmouth, New Jersey, to develop the world’s first communications satellite, SCORE (Signal Communications by Orbital Relay Equipment). And less

LEFT: In the days before clean rooms, technicians work on the nation’s first weather satellite, the Television Infrared Observation Satellite (TIROS). ABOVE: Scientists prepare the first navigation satellite, Transit, for launch. Piggybacking on the spiral-adorned Transit was the Naval Research Laboratory’s Solrad 1, a satellite with the dual purpose of measuring solar radiation and listening in on Soviet radar emissions.

than five months from project go-ahead, on Dec. 18, 1958, an Atlas rocket boosted SCORE into orbit and along with it the tape-recorded voice of Eisenhower conveying his holiday-time message – “America’s wish for peace on Earth and good will toward men everywhere” – to ground stations around the globe. This success helped provide a model for ARPA’s management of space projects, as Owen Brown, Fred Kennedy, and Wade Pulliam wrote in their 50th anniversary recounting of the agency’s space efforts, DARPA’s Space History: “As with the other projects it began, ARPA took an agile management role in the SCORE system development, with the Air Force being handed the responsibility for the Atlas, built by General Dynamics, and SRDL for the payload, built by RCA. This approach of maintaining low overhead was, and still is, a vital part of the success of the agency, especially during the early years when so many space systems were being developed and demonstrated. In what would become standard procedure, the agency concentrated on developing and fostering innovative concepts, as well as making key project funding decisions, while leaving the burden of facility and workforce maintenance, system development and production, and operations to industry, research labs, and the military services. At first this decision was made mostly for the bureaucratic reason of limiting the objections of the services at having their space programs transferred to ARPA. In the long run, however, it has served the agency well in keeping it