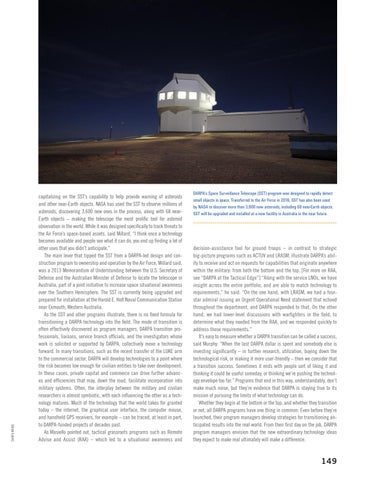 capitalizing on the SST’s capability to help provide warning of asteroids and other near-Earth objects. NASA has used the SST to observe millions of asteroids, discovering 3,600 new ones in the process, along with 68 nearEarth objects – making the telescope the most prolific tool for asteroid observation in the world. While it was designed specifically to track threats to the Air Force’s space-based assets, said Millard, “I think once a technology becomes available and people see what it can do, you end up finding a lot of other uses that you didn’t anticipate.” The main lever that tipped the SST from a DARPA-led design and construction program to ownership and operation by the Air Force, Millard said, was a 2013 Memorandum of Understanding between the U.S. Secretary of Defense and the Australian Minister of Defense to locate the telescope in Australia, part of a joint initiative to increase space situational awareness over the Southern Hemisphere. The SST is currently being upgraded and prepared for installation at the Harold E. Holt Naval Communication Station near Exmouth, Western Australia. As the SST and other programs illustrate, there is no fixed formula for transitioning a DARPA technology into the field. The mode of transition is often effectively discovered as program managers, DARPA transition professionals, liaisons, service branch officials, and the investigators whose work is solicited or supported by DARPA, collectively move a technology forward. In many transitions, such as the recent transfer of the LUKE arm to the commercial sector, DARPA will develop technologies to a point where the risk becomes low enough for civilian entities to take over development. In these cases, private capital and commerce can drive further advances and efficiencies that may, down the road, facilitate incorporation into military systems. Often, the interplay between the military and civilian researchers is almost symbiotic, with each influencing the other as a technology matures. Much of the technology that the world takes for granted today – the internet, the graphical user interface, the computer mouse, and handheld GPS receivers, for example – can be traced, at least in part, to DARPA-funded projects of decades past. As Masiello pointed out, tactical grassroots programs such as Remote Advise and Assist (RAA) – which led to a situational awareness and

DARPA’s Space Surveillance Telescope (SST) program was designed to rapidly detect small objects in space. Transferred to the Air Force in 2016, SST has also been used by NASA to discover more than 3,600 new asteroids, including 68 near-Earth objects. SST will be upgraded and installed at a new facility in Australia in the near future.

decision-assistance tool for ground troops – in contrast to strategic big-picture programs such as ACTUV and LRASM, illustrate DARPA’s ability to receive and act on requests for capabilities that originate anywhere within the military: from both the bottom and the top. [For more on RAA, see “DARPA at the Tactical Edge”] “Along with the service LNOs, we have insight across the entire portfolio, and are able to match technology to requirements,” he said. “On the one hand, with LRASM, we had a fourstar admiral issuing an Urgent Operational Need statement that echoed throughout the department, and DARPA responded to that. On the other hand, we had lower-level discussions with warfighters in the field, to determine what they needed from the RAA, and we responded quickly to address those requirements.” It’s easy to measure whether a DARPA transition can be called a success, said Murphy: “When the last DARPA dollar is spent and somebody else is investing significantly – in further research, utilization, buying down the technological risk, or making it more user-friendly – then we consider that a transition success. Sometimes it ends with people sort of liking it and thinking it could be useful someday, or thinking we’re pushing the technology envelope too far.” Programs that end in this way, understandably, don’t make much noise, but they’re evidence that DARPA is staying true to its mission of pursuing the limits of what technology can do. Whether they begin at the bottom or the top, and whether they transition or not, all DARPA programs have one thing in common: Even before they’re launched, their program managers develop strategies for transitioning anticipated results into the real world. From their first day on the job, DARPA program managers envision that the new extraordinary technology ideas they expect to make real ultimately will make a difference.