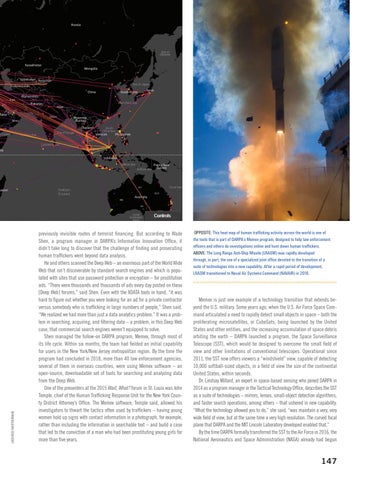 previously invisible routes of terrorist financing. But according to Wade Shen, a program manager in DARPA’s Information Innovation Office, it didn’t take long to discover that the challenge of finding and prosecuting human traffickers went beyond data analysis. He and others scanned the Deep Web – an enormous part of the World Wide Web that isn’t discoverable by standard search engines and which is populated with sites that use password protection or encryption – for prostitution ads. “There were thousands and thousands of ads every day posted on these [Deep Web] forums,” said Shen. Even with the XDATA tools in hand, “it was hard to figure out whether you were looking for an ad for a private contractor versus somebody who is trafficking in large numbers of people,” Shen said. “We realized we had more than just a data analytics problem.” It was a problem in searching, acquiring, and filtering data – a problem, in this Deep Web case, that commercial search engines weren’t equipped to solve. Shen managed the follow-on DARPA program, Memex, through most of its life cycle. Within six months, the team had fielded an initial capability for users in the New York/New Jersey metropolitan region. By the time the program had concluded in 2018, more than 40 law enforcement agencies, several of them in overseas countries, were using Memex software – an open-source, downloadable set of tools for searching and analyzing data from the Deep Web. One of the presenters at the 2015 Wait, What? forum in St. Louis was John Temple, chief of the Human Trafficking Response Unit for the New York County District Attorney’s Office. The Memex software, Temple said, allowed his investigators to thwart the tactics often used by traffickers – having young women hold up signs with contact information in a photograph, for example, rather than including the information in searchable text – and build a case that led to the conviction of a man who had been prostituting young girls for more than five years.

OPPOSITE: This heat map of human trafficking activity across the world is one of the tools that is part of DARPA’s Memex program, designed to help law enforcement officers and others do investigations online and hunt down human traffickers. ABOVE: The Long Range Anti-Ship Missile (LRASM) was rapidly developed through, in part, the use of a specialized joint office devoted to the transition of a suite of technologies into a new capability. After a rapid period of development, LRASM transitioned to Naval Air Systems Command (NAVAIR) in 2016.

Memex is just one example of a technology transition that extends beyond the U.S. military. Some years ago, when the U.S. Air Force Space Command articulated a need to rapidly detect small objects in space – both the proliferating microsatellites, or CubeSats, being launched by the United States and other entities, and the increasing accumulation of space debris orbiting the earth – DARPA launched a program, the Space Surveillance Telescope (SST), which would be designed to overcome the small field of view and other limitations of conventional telescopes. Operational since 2011, the SST now offers viewers a “windshield” view, capable of detecting 10,000 softball-sized objects, in a field of view the size of the continental United States, within seconds. Dr. Lindsay Millard, an expert in space-based sensing who joined DARPA in 2014 as a program manager in the Tactical Technology Office, describes the SST as a suite of technologies – mirrors, lenses, small-object detection algorithms, and faster search operations, among others – that ushered in new capability. “What the technology allowed you to do,” she said, “was maintain a very, very wide field of view, but at the same time a very high resolution. The curved focal plane that DARPA and the MIT Lincoln Laboratory developed enabled that.” By the time DARPA formally transferred the SST to the Air Force in 2016, the National Aeronautics and Space Administration (NASA) already had begun