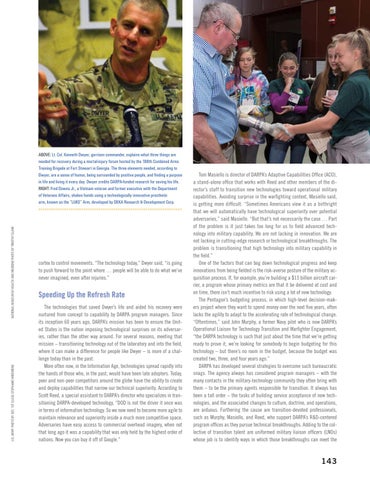 NATIONAL MUSEUM OF HEALTH AND MEDICINE PHOTO BY TIMOTHY CLARK

ABOVE: Lt. Col. Kenneth Dwyer, garrison commander, explains what three things are needed for recovery during a mortal-injury forum hosted by the 188th Combined Arms Training Brigade at Fort Stewart in Georgia. The three elements needed, according to Dwyer, are a sense of humor, being surrounded by positive people, and finding a purpose in life and living it every day. Dwyer credits DARPA-funded research for saving his life. RIGHT: Fred Downs Jr., a Vietnam veteran and former executive with the Department of Veterans Affairs, shakes hands using a technologically innovative prosthetic arm, known as the “LUKE” Arm, developed by DEKA Research & Development Corp.

cortex to control movements. “The technology today,” Dwyer said, “is going to push forward to the point where … people will be able to do what we’ve never imagined, even after injuries.”

Speeding Up the Refresh Rate The technologies that saved Dwyer’s life and aided his recovery were nurtured from concept to capability by DARPA program managers. Since its inception 60 years ago, DARPA’s mission has been to ensure the United States is the nation imposing technological surprises on its adversaries, rather than the other way around. For several reasons, meeting that mission – transitioning technology out of the laboratory and into the field, where it can make a difference for people like Dwyer – is more of a challenge today than in the past. More often now, in the Information Age, technologies spread rapidly into the hands of those who, in the past, would have been late adopters. Today, peer and non-peer competitors around the globe have the ability to create and deploy capabilities that narrow our technical superiority. According to Scott Reed, a special assistant to DARPA’s director who specializes in transitioning DARPA-developed technology, “DOD is not the driver it once was in terms of information technology. So we now need to become more agile to maintain relevance and superiority inside a much more competitive space. Adversaries have easy access to commercial overhead imagery, when not that long ago it was a capability that was only held by the highest order of nations. Now you can buy it off of Google.”

Tom Masiello is director of DARPA’s Adaptive Capabilities Office (ACO), a stand-alone office that works with Reed and other members of the director’s staff to transition new technologies toward operational military capabilities. Avoiding surprise in the warfighting context, Masiello said, is getting more difficult. “Sometimes Americans view it as a birthright that we will automatically have technological superiority over potential adversaries,” said Masiello. “But that’s not necessarily the case … Part of the problem is it just takes too long for us to field advanced technology into military capability. We are not lacking in innovation. We are not lacking in cutting-edge research or technological breakthroughs. The problem is transitioning that high technology into military capability in the field.” One of the factors that can bog down technological progress and keep innovations from being fielded is the risk-averse posture of the military acquisition process. If, for example, you’re building a $13 billion aircraft carrier, a program whose primary metrics are that it be delivered at cost and on time, there isn’t much incentive to risk using a lot of new technology. The Pentagon’s budgeting process, in which high-level decision-makers project where they want to spend money over the next five years, often lacks the agility to adapt to the accelerating rate of technological change. “Oftentimes,” said John Murphy, a former Navy pilot who is now DARPA’s Operational Liaison for Technology Transition and Warfighter Engagement, “the DARPA technology is such that just about the time that we’re getting ready to prove it, we’re looking for somebody to begin budgeting for this technology – but there’s no room in the budget, because the budget was created two, three, and four years ago.” DARPA has developed several strategies to overcome such bureaucratic snags. The agency always has considered program managers – with the many contacts in the military-technology community they often bring with them – to be the primary agents responsible for transition. It always has been a tall order – the tasks of building service acceptance of new technologies, and the associated changes to culture, doctrine, and operations, are arduous. Furthering the cause are transition-devoted professionals, such as Murphy, Masiello, and Reed, who support DARPA’s R&D-centered program offices as they pursue technical breakthroughs. Adding to the collective of transition talent are uniformed military liaison officers (LNOs) whose job is to identify ways in which those breakthroughs can meet the