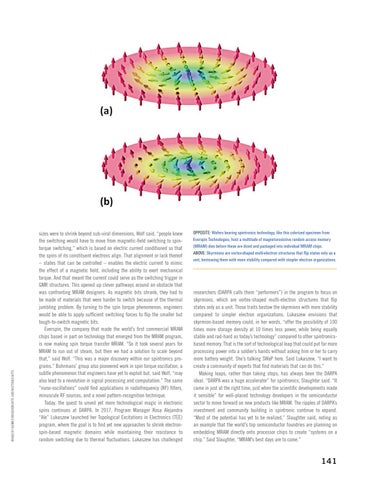 sizes were to shrink beyond sub-viral dimensions, Wolf said, “people knew the switching would have to move from magnetic-field switching to spintorque switching,” which is based on electric current conditioned so that the spins of its constituent electrons align. That alignment or lack thereof – states that can be controlled – enables the electric current to mimic the effect of a magnetic field, including the ability to exert mechanical torque. And that meant the current could serve as the switching trigger in GMR structures. This opened up clever pathways around an obstacle that was confronting MRAM designers. As magnetic bits shrank, they had to be made of materials that were harder to switch because of the thermal jumbling problem. By turning to the spin torque phenomenon, engineers would be able to apply sufficient switching forces to flip the smaller but tough-to-switch magnetic bits. Everspin, the company that made the world’s first commercial MRAM chips based in part on technology that emerged from the MRAM program, is now making spin torque transfer MRAM. “So it took several years for MRAM to run out of steam, but then we had a solution to scale beyond that,” said Wolf. “This was a major discovery within our spintronics programs.” Buhrmans’ group also pioneered work in spin torque oscillation, a subtle phenomenon that engineers have yet to exploit but, said Wolf, “may also lead to a revolution in signal processing and computation.” The same “nano-oscillations” could find applications in radiofrequency (RF) filters, minuscule RF sources, and a novel pattern-recognition technique. Today, the quest to unveil yet more technological magic in electronic spins continues at DARPA. In 2017, Program Manager Rosa Alejandra “Ale” Lukaszew launched her Topological Excitations in Electronics (TEE) program, where the goal is to find yet new approaches to shrink electronspin-based magnetic domains while maintaining their resistance to random switching due to thermal fluctuations. Lukaszew has challenged

OPPOSITE: Wafers bearing spintronics technology, like this colorized specimen from Everspin Technologies, host a multitude of magnetoresistive random access memory (MRAM) dies before these are diced and packaged into individual MRAM chips. ABOVE: Skyrmions are vortex-shaped multi-electron structures that flip states only as a unit, bestowing them with more stability compared with simpler electron organizations.

researchers (DARPA calls them “performers”) in the program to focus on skyrmions, which are vortex-shaped multi-electron structures that flip states only as a unit. Those traits bestow the skyrmions with more stability compared to simpler electron organizations. Lukaszew envisions that skyrmion-based memory could, in her words, “offer the possibility of 100 times more storage density at 10 times less power, while being equally stable and rad-hard as today’s technology” compared to other spintronicsbased memory. That is the sort of technological leap that could put far more processing power into a soldier’s hands without asking him or her to carry more battery weight. She’s talking SWaP here. Said Lukaszew, “I want to create a community of experts that find materials that can do this.” Making leaps, rather than taking steps, has always been the DARPA ideal. “DARPA was a huge accelerator” for spintronics, Slaughter said. “It came in just at the right time, just when the scientific developments made it sensible” for well-placed technology developers in the semiconductor sector to move forward on new products like MRAM. The ripples of DARPA’s investment and community building in spintronic continue to expand. “Most of the potential has yet to be realized,” Slaughter said, noting as an example that the world’s top semiconductor foundries are planning on embedding MRAM directly onto processor chips to create “systems on a chip.” Said Slaughter, “MRAM’s best days are to come.”