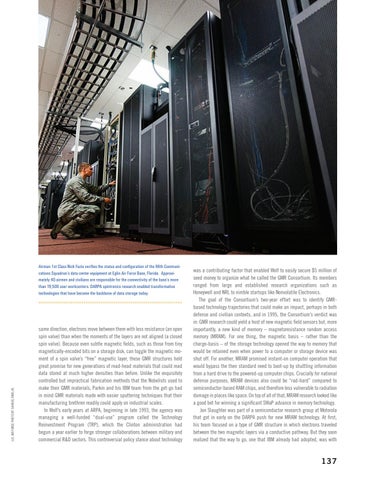 Airman 1st Class Nick Fazio verifies the status and configuration of the 96th Communications Squadron’s data center equipment at Eglin Air Force Base, Florida. Approximately 40 airmen and civilians are responsible for the connectivity of the base’s more than 19,500 user workcenters. DARPA spintronics research enabled transformative technologies that have become the backbone of data storage today.

same direction, electrons move between them with less resistance (an open spin valve) than when the moments of the layers are not aligned (a closed spin valve). Because even subtle magnetic fields, such as those from tiny magnetically-encoded bits on a storage disk, can toggle the magnetic moment of a spin valve’s “free” magnetic layer, these GMR structures held great promise for new generations of read-head materials that could read data stored at much higher densities than before. Unlike the exquisitely controlled but impractical fabrication methods that the Nobelists used to make their GMR materials, Parkin and his IBM team from the get-go had in mind GMR materials made with easier sputtering techniques that their manufacturing brethren readily could apply on industrial scales. In Wolf’s early years at ARPA, beginning in late 1993, the agency was managing a well-funded “dual-use” program called the Technology Reinvestment Program (TRP), which the Clinton administration had begun a year earlier to forge stronger collaborations between military and commercial R&D sectors. This controversial policy stance about technology

was a contributing factor that enabled Wolf to easily secure $5 million of seed money to organize what he called the GMR Consortium. Its members ranged from large and established research organizations such as Honeywell and NRL to nimble startups like Nonvolatile Electronics. The goal of the Consortium’s two-year effort was to identify GMRbased technology trajectories that could make an impact, perhaps in both defense and civilian contexts, and in 1995, the Consortium’s verdict was in: GMR research could yield a host of new magnetic field sensors but, more importantly, a new kind of memory – magnetoresistance random access memory (MRAM). For one thing, the magnetic basis – rather than the charge-basis – of the storage technology opened the way to memory that would be retained even when power to a computer or storage device was shut off. For another, MRAM promised instant-on computer operation that would bypass the then standard need to boot-up by shuttling information from a hard drive to the powered-up computer chips. Crucially for national defense purposes, MRAM devices also could be “rad-hard” compared to semiconductor-based RAM chips, and therefore less vulnerable to radiation damage in places like space. On top of all of that, MRAM research looked like a good bet for winning a significant SWaP advance in memory technology. Jon Slaughter was part of a semiconductor research group at Motorola that got in early on the DARPA push for new MRAM technology. At first, his team focused on a type of GMR structure in which electrons traveled between the two magnetic layers via a conductive pathway. But they soon realized that the way to go, one that IBM already had adopted, was with