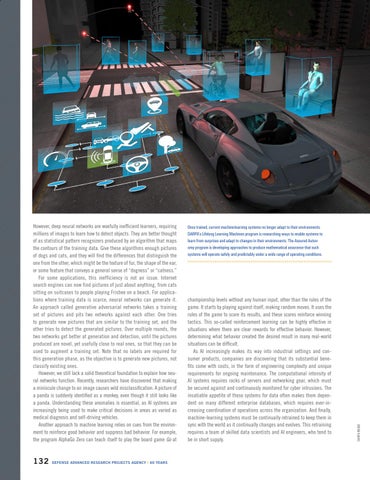 Once trained, current machine-learning systems no longer adapt to their environments. DARPA’s Lifelong Learning Machines program is researching ways to enable systems to learn from surprises and adapt to changes in their environments. The Assured Autonomy program is developing approaches to produce mathematical assurance that such systems will operate safely and predictably under a wide range of operating conditions.

championship levels without any human input, other than the rules of the game. It starts by playing against itself, making random moves. It uses the rules of the game to score its results, and these scores reinforce winning tactics. This so-called reinforcement learning can be highly effective in situations where there are clear rewards for effective behavior. However, determining what behavior created the desired result in many real-world situations can be difficult. As AI increasingly makes its way into industrial settings and consumer products, companies are discovering that its substantial benefits come with costs, in the form of engineering complexity and unique requirements for ongoing maintenance. The computational intensity of AI systems requires racks of servers and networking gear, which must be secured against and continuously monitored for cyber intrusions. The insatiable appetite of these systems for data often makes them dependent on many different enterprise databases, which requires ever-increasing coordination of operations across the organization. And finally, machine-learning systems must be continually retrained to keep them in sync with the world as it continually changes and evolves. This retraining requires a team of skilled data scientists and AI engineers, who tend to be in short supply.

However, deep neural networks are woefully inefficient learners, requiring millions of images to learn how to detect objects. They are better thought of as statistical pattern recognizers produced by an algorithm that maps the contours of the training data. Give these algorithms enough pictures of dogs and cats, and they will find the differences that distinguish the one from the other, which might be the texture of fur, the shape of the ear, or some feature that conveys a general sense of “dogness” or “catness.” For some applications, this inefficiency is not an issue. Internet search engines can now find pictures of just about anything, from cats sitting on suitcases to people playing Frisbee on a beach. For applications where training data is scarce, neural networks can generate it. An approach called generative adversarial networks takes a training set of pictures and pits two networks against each other. One tries to generate new pictures that are similar to the training set, and the other tries to detect the generated pictures. Over multiple rounds, the two networks get better at generation and detection, until the pictures produced are novel, yet usefully close to real ones, so that they can be used to augment a training set. Note that no labels are required for this generation phase, as the objective is to generate new pictures, not classify existing ones. However, we still lack a solid theoretical foundation to explain how neural networks function. Recently, researchers have discovered that making a miniscule change to an image causes wild misclassification. A picture of a panda is suddenly identified as a monkey, even though it still looks like a panda. Understanding these anomalies is essential, as AI systems are increasingly being used to make critical decisions in areas as varied as medical diagnosis and self-driving vehicles. Another approach to machine learning relies on cues from the environment to reinforce good behavior and suppress bad behavior. For example, the program AlphaGo Zero can teach itself to play the board game Go at