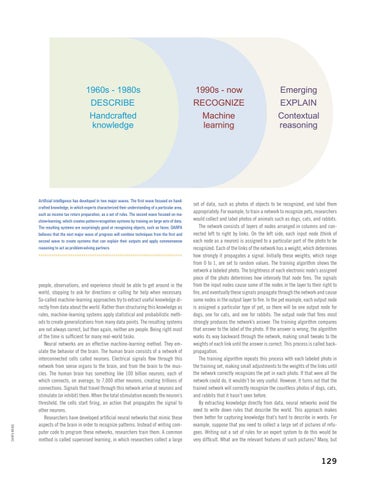 Artificial intelligence has developed in two major waves. The first wave focused on handcrafted knowledge, in which experts characterized their understanding of a particular area, such as income tax return preparation, as a set of rules. The second wave focused on machine-learning, which creates pattern-recognition systems by training on large sets of data. The resulting systems are surprisingly good at recognizing objects, such as faces. DARPA believes that the next major wave of progress will combine techniques from the first and second wave to create systems that can explain their outputs and apply commonsense reasoning to act as problem-solving partners.

people, observations, and experience should be able to get around in the world, stopping to ask for directions or calling for help when necessary. So-called machine-learning approaches try to extract useful knowledge directly from data about the world. Rather than structuring this knowledge as rules, machine-learning systems apply statistical and probabilistic methods to create generalizations from many data points. The resulting systems are not always correct, but then again, neither are people. Being right most of the time is sufficient for many real-world tasks. Neural networks are an effective machine-learning method. They emulate the behavior of the brain. The human brain consists of a network of interconnected cells called neurons. Electrical signals flow through this network from sense organs to the brain, and from the brain to the muscles. The human brain has something like 100 billion neurons, each of which connects, on average, to 7,000 other neurons, creating trillions of connections. Signals that travel through this network arrive at neurons and stimulate (or inhibit) them. When the total stimulation exceeds the neuron’s threshold, the cells start firing, an action that propagates the signal to other neurons. Researchers have developed artificial neural networks that mimic these aspects of the brain in order to recognize patterns. Instead of writing computer code to program these networks, researchers train them. A common method is called supervised learning, in which researchers collect a large

set of data, such as photos of objects to be recognized, and label them appropriately. For example, to train a network to recognize pets, researchers would collect and label photos of animals such as dogs, cats, and rabbits. The network consists of layers of nodes arranged in columns and connected left to right by links. On the left side, each input node (think of each node as a neuron) is assigned to a particular part of the photo to be recognized. Each of the links of the network has a weight, which determines how strongly it propagates a signal. Initially these weights, which range from 0 to 1, are set to random values. The training algorithm shows the network a labeled photo. The brightness of each electronic node’s assigned piece of the photo determines how intensely that node fires. The signals from the input nodes cause some of the nodes in the layer to their right to fire, and eventually these signals propagate through the network and cause some nodes in the output layer to fire. In the pet example, each output node is assigned a particular type of pet, so there will be one output node for dogs, one for cats, and one for rabbits. The output node that fires most strongly produces the network’s answer. The training algorithm compares that answer to the label of the photo. If the answer is wrong, the algorithm works its way backward through the network, making small tweaks to the weights of each link until the answer is correct. This process is called backpropagation. The training algorithm repeats this process with each labeled photo in the training set, making small adjustments to the weights of the links until the network correctly recognizes the pet in each photo. If that were all the network could do, it wouldn’t be very useful. However, it turns out that the trained network will correctly recognize the countless photos of dogs, cats, and rabbits that it hasn’t seen before. By extracting knowledge directly from data, neural networks avoid the need to write down rules that describe the world. This approach makes them better for capturing knowledge that’s hard to describe in words. For example, suppose that you need to collect a large set of pictures of refugees. Writing out a set of rules for an expert system to do this would be very difficult. What are the relevant features of such pictures? Many, but