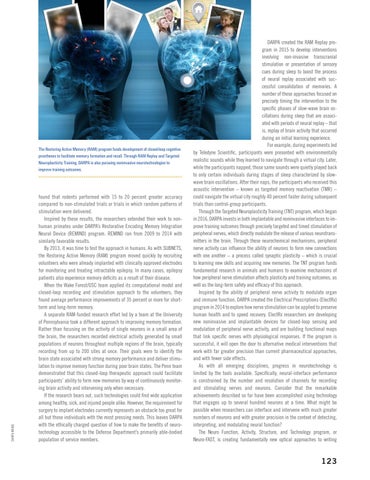 found that rodents performed with 15 to 20 percent greater accuracy compared to non-stimulated trials or trials in which random patterns of stimulation were delivered. Inspired by these results, the researchers extended their work to nonhuman primates under DARPA’s Restorative Encoding Memory Integration Neural Device (REMIND) program. REMIND ran from 2009 to 2014 with similarly favorable results. By 2013, it was time to test the approach in humans. As with SUBNETS, the Restoring Active Memory (RAM) program moved quickly by recruiting volunteers who were already implanted with clinically approved electrodes for monitoring and treating intractable epilepsy. In many cases, epilepsy patients also experience memory deficits as a result of their disease. When the Wake Forest/USC team applied its computational model and closed-loop recording and stimulation approach to the volunteers, they found average performance improvements of 35 percent or more for shortterm and long-term memory. A separate RAM-funded research effort led by a team at the University of Pennsylvania took a different approach to improving memory formation. Rather than focusing on the activity of single neurons in a small area of the brain, the researchers recorded electrical activity generated by small populations of neurons throughout multiple regions of the brain, typically recording from up to 200 sites at once. Their goals were to identify the brain state associated with strong memory performance and deliver stimulation to improve memory function during poor brain states. The Penn team demonstrated that this closed-loop therapeutic approach could facilitate participants’ ability to form new memories by way of continuously monitoring brain activity and intervening only when necessary. If the research bears out, such technologies could find wide application among healthy, sick, and injured people alike. However, the requirement for surgery to implant electrodes currently represents an obstacle too great for all but those individuals with the most pressing needs. This leaves DARPA with the ethically charged question of how to make the benefits of neurotechnology accessible to the Defense Department’s primarily able-bodied population of service members.

DARPA created the RAM Replay program in 2015 to develop interventions involving non-invasive transcranial stimulation or presentation of sensory cues during sleep to boost the process of neural replay associated with successful consolidation of memories. A number of these approaches focused on precisely timing the intervention to the specific phases of slow-wave brain oscillations during sleep that are associated with periods of neural replay – that is, replay of brain activity that occurred during an initial learning experience. For example, during experiments led by Teledyne Scientific, participants were presented with environmentally realistic sounds while they learned to navigate through a virtual city. Later, while the participants napped, those same sounds were quietly played back to only certain individuals during stages of sleep characterized by slowwave brain oscillations. After their naps, the participants who received this acoustic intervention – known as targeted memory reactivation (TMR) – could navigate the virtual city roughly 40 percent faster during subsequent trials than control-group participants. Through the Targeted Neuroplasticity Training (TNT) program, which began in 2016, DARPA invests in both implantable and noninvasive interfaces to improve training outcomes through precisely targeted and timed stimulation of peripheral nerves, which directly modulate the release of various neurotransmitters in the brain. Through these neurochemical mechanisms, peripheral nerve activity can influence the ability of neurons to form new connections with one another – a process called synaptic plasticity – which is crucial to learning new skills and acquiring new memories. The TNT program funds fundamental research in animals and humans to examine mechanisms of how peripheral nerve stimulation affects plasticity and training outcomes, as well as the long-term safety and efficacy of this approach. Inspired by the ability of peripheral nerve activity to modulate organ and immune function, DARPA created the Electrical Prescriptions (ElectRx) program in 2014 to explore how nerve stimulation can be applied to preserve human health and to speed recovery. ElectRx researchers are developing new noninvasive and implantable devices for closed-loop sensing and modulation of peripheral nerve activity, and are building functional maps that link specific nerves with physiological responses. If the program is successful, it will open the door to alternative medical interventions that work with far greater precision than current pharmaceutical approaches, and with fewer side effects. As with all emerging disciplines, progress in neurotechnology is limited by the tools available. Specifically, neural-interface performance is constrained by the number and resolution of channels for recording and stimulating nerves and neurons. Consider that the remarkable achievements described so far have been accomplished using technology that engages up to several hundred neurons at a time. What might be possible when researchers can interface and intervene with much greater numbers of neurons and with greater precision in the context of detecting, interpreting, and modulating neural function? The Neuro Function, Activity, Structure, and Technology program, or Neuro-FAST, is creating fundamentally new optical approaches to writing