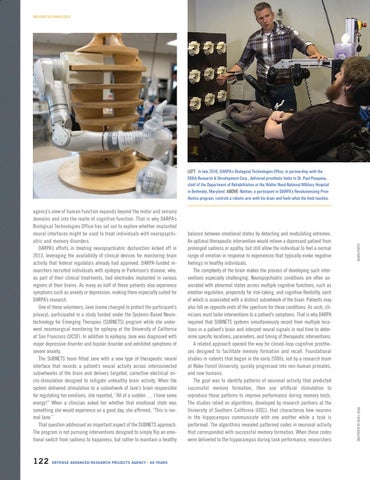 balance between emotional states by detecting and modulating extremes. An optimal therapeutic intervention would relieve a depressed patient from prolonged sadness or apathy, but still allow the individual to feel a normal range of emotion in response to experiences that typically evoke negative feelings in healthy individuals. The complexity of the brain makes the process of developing such interventions especially challenging. Neuropsychiatric conditions are often associated with abnormal states across multiple cognitive functions, such as emotion regulation, propensity for risk-taking, and cognitive flexibility, each of which is associated with a distinct subnetwork of the brain. Patients may also fall on opposite ends of the spectrum for these conditions. As such, clinicians must tailor interventions to a patient’s symptoms. That is why DARPA required that SUBNETS systems simultaneously record from multiple locations in a patient’s brain and interpret neural signals in real time to determine specific locations, parameters, and timing of therapeutic interventions. A related approach opened the way for closed-loop cognitive prostheses designed to facilitate memory formation and recall. Foundational studies in rodents that began in the early 2000s, led by a research team at Wake Forest University, quickly progressed into non-human primates, and now humans. The goal was to identify patterns of neuronal activity that predicted successful memory formation, then use artificial stimulation to reproduce those patterns to improve performance during memory tests. The studies relied on algorithms, developed by research partners at the University of Southern California (USC), that characterize how neurons in the hippocampus communicate with one another while a task is performed. The algorithms revealed patterned codes in neuronal activity that corresponded with successful memory formation. When these codes were delivered to the hippocampus during task performance, researchers

agency’s view of human function expands beyond the motor and sensory domains and into the realm of cognitive function. That is why DARPA’s Biological Technologies Office has set out to explore whether implanted neural interfaces might be used to treat individuals with neuropsychiatric and memory disorders. DARPA’s efforts in treating neuropsychiatric dysfunction kicked off in 2013, leveraging the availability of clinical devices for monitoring brain activity that federal regulators already had approved. DARPA-funded researchers recruited individuals with epilepsy or Parkinson’s disease, who, as part of their clinical treatments, had electrodes implanted in various regions of their brains. As many as half of these patients also experience symptoms such as anxiety or depression, making them especially suited for DARPA’s research. One of these volunteers, Jane (name changed to protect the participant’s privacy), participated in a study funded under the Systems-Based Neurotechnology for Emerging Therapies (SUBNETS) program while she underwent neurosurgical monitoring for epilepsy at the University of California at San Francisco (UCSF). In addition to epilepsy, Jane was diagnosed with major depressive disorder and bipolar disorder and exhibited symptoms of severe anxiety. The SUBNETS team fitted Jane with a new type of therapeutic neural interface that records a patient’s neural activity across interconnected subnetworks of the brain and delivers targeted, corrective electrical micro-stimulation designed to mitigate unhealthy brain activity. When the system delivered stimulation to a subnetwork of Jane’s brain responsible for regulating her emotions, she reported, “All of a sudden … I have some energy!” When a clinician asked her whether that emotional state was something she would experience on a good day, she affirmed, “This is normal Jane.” That question addressed an important aspect of the SUBNETS approach. The program is not pursuing interventions designed to simply flip an emotional switch from sadness to happiness, but rather to maintain a healthy

LEFT: In late 2016, DARPA’s Biological Technologies Office, in partnership with the DEKA Research & Development Corp., delivered prosthetic limbs to Dr. Paul Pasquina, chief of the Department of Rehabilitation at the Walter Reed National Military Hospital in Bethesda, Maryland. ABOVE: Nathan, a participant in DARPA’s Revolutionizing Prosthetics program, controls a robotic arm with his brain and feels what the limb touches.