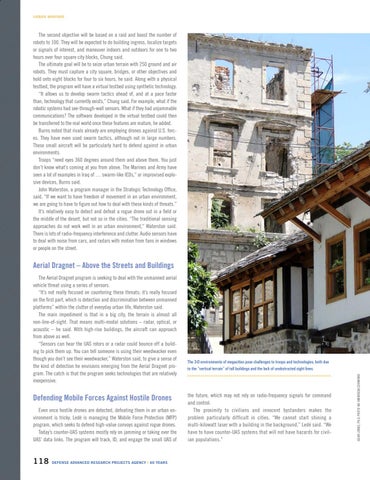 The second objective will be based on a raid and boost the number of robots to 100. They will be expected to do building ingress, localize targets or signals of interest, and maneuver indoors and outdoors for one to two hours over four square city blocks, Chung said. The ultimate goal will be to seize urban terrain with 250 ground and air robots. They must capture a city square, bridges, or other objectives and hold onto eight blocks for four to six hours, he said. Along with a physical testbed, the program will have a virtual testbed using synthetic technology. “It allows us to develop swarm tactics ahead of, and at a pace faster than, technology that currently exists,” Chung said. For example, what if the robotic systems had see-through-wall sensors. What if they had unjammable communications? The software developed in the virtual testbed could then be transferred to the real world once these features are mature, he added. Burns noted that rivals already are employing drones against U.S. forces. They have even used swarm tactics, although not in large numbers. These small aircraft will be particularly hard to defend against in urban environments. Troops “need eyes 360 degrees around them and above them. You just don’t know what’s coming at you from above. The Marines and Army have seen a lot of examples in Iraq of … swarm-like IEDs,” or improvised explosive devices, Burns said. John Waterston, a program manager in the Strategic Technology Office, said, “If we want to have freedom of movement in an urban environment, we are going to have to figure out how to deal with these kinds of threats.” It’s relatively easy to detect and defeat a rogue drone out in a field or the middle of the desert, but not so in the cities. “The traditional sensing approaches do not work well in an urban environment,” Waterston said. There is lots of radio-frequency interference and clutter. Audio sensors have to deal with noise from cars, and radars with motion from fans in windows or people on the street.

Aerial Dragnet – Above the Streets and Buildings

Defending Mobile Forces Against Hostile Drones Even once hostile drones are detected, defeating them in an urban environment is tricky. Ledé is managing the Mobile Force Protection (MFP) program, which seeks to defend high-value convoys against rogue drones. Today’s counter-UAS systems mostly rely on jamming or taking over the UAS’ data links. The program will track, ID, and engage the small UAS of

The 3-D environments of megacities pose challenges to troops and technologies, both due to the “vertical terrain” of tall buildings and the lack of unobstructed sight lines.

the future, which may not rely on radio-frequency signals for command and control. The proximity to civilians and innocent bystanders makes the problem particularly difficult in cities. “We cannot start shining a multi-kilowatt laser with a building in the background,” Ledé said. “We have to have counter-UAS systems that will not have hazards for civilian populations.”

The Aerial Dragnet program is seeking to deal with the unmanned aerial vehicle threat using a series of sensors. “It’s not really focused on countering these threats; it’s really focused on the first part, which is detection and discrimination between unmanned platforms” within the clutter of everyday urban life, Waterston said. The main impediment is that in a big city, the terrain is almost all non-line-of-sight. That means multi-modal solutions – radar, optical, or acoustic – he said. With high-rise buildings, the aircraft can approach from above as well. “Sensors can hear the UAS rotors or a radar could bounce off a building to pick them up. You can tell someone is using their weedwacker even though you don’t see their weedwacker,” Waterston said, to give a sense of the kind of detection he envisions emerging from the Aerial Dragnet program. The catch is that the program seeks technologies that are relatively inexpensive.