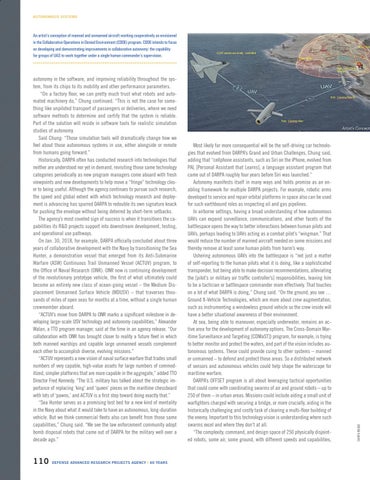 autonomy in the software, and improving reliability throughout the system, from its chips to its mobility and other performance parameters. “On a factory floor, we can pretty much trust what robots and automated machinery do,” Chung continued. “This is not the case for something like unpiloted transport of passengers or deliveries, where we need software methods to determine and certify that the system is reliable. Part of the solution will reside in software tools for realistic simulation studies of autonomy. Said Chung: “Those simulation tools will dramatically change how we feel about those autonomous systems in use, either alongside or remote from humans going forward.” Historically, DARPA often has conducted research into technologies that neither are understood nor yet in demand, revisiting those same technology categories periodically as new program managers come aboard with fresh viewpoints and new developments to help move a “fringe” technology closer to being useful. Although the agency continues to pursue such research, the speed and global extent with which technology research and deployment is advancing has spurred DARPA to redouble its own signature knack for pushing the envelope without being deterred by short-term setbacks. The agency’s most coveted sign of success is when it transitions the capabilities its R&D projects support into downstream development, testing, and operational use pathways. On Jan. 30, 2018, for example, DARPA officially concluded about three years of collaborative development with the Navy by transitioning the Sea Hunter, a demonstration vessel that emerged from its Anti-Submarine Warfare (ASW) Continuous Trail Unmanned Vessel (ACTUV) program, to the Office of Naval Research (ONR). ONR now is continuing development of the revolutionary prototype vehicle, the first of what ultimately could become an entirely new class of ocean-going vessel – the Medium Displacement Unmanned Surface Vehicle (MDUSV) – that traverses thousands of miles of open seas for months at a time, without a single human crewmember aboard. “ACTUV’s move from DARPA to ONR marks a significant milestone in developing large-scale USV technology and autonomy capabilities,” Alexander Walan, a TTO program manager, said at the time in an agency release. “Our collaboration with ONR has brought closer to reality a future fleet in which both manned warships and capable large unmanned vessels complement each other to accomplish diverse, evolving missions.” “ACTUV represents a new vision of naval surface warfare that trades small numbers of very capable, high-value assets for large numbers of commoditized, simpler platforms that are more capable in the aggregate,” added TTO Director Fred Kennedy. “The U.S. military has talked about the strategic importance of replacing ‘king’ and ‘queen’ pieces on the maritime chessboard with lots of ‘pawns,’ and ACTUV is a first step toward doing exactly that.” “Sea Hunter serves as a promising test bed for a new kind of mentality in the Navy about what it would take to have an autonomous, long-duration vehicle. But we think commercial fleets also can benefit from those same capabilities,” Chung said. “We see the law enforcement community adopt bomb disposal robots that came out of DARPA for the military well over a decade ago.”

Most likely far more consequential will be the self-driving car technologies that evolved from DARPA’s Grand and Urban Challenges, Chung said, adding that “cellphone assistants, such as Siri on the iPhone, evolved from PAL [Personal Assistant that Learns], a language assistant program that came out of DARPA roughly four years before Siri was launched.” Autonomy manifests itself in many ways and holds promise as an enabling framework for multiple DARPA projects. For example, robotic arms developed to service and repair orbital platforms in space also can be used for such earthbound roles as inspecting oil and gas pipelines. In airborne settings, having a broad understanding of how autonomous UAVs can expand surveillance, communications, and other facets of the battlespace opens the way to better interactions between human pilots and UAVs, perhaps leading to UAVs acting as a combat pilot’s “wingman.” That would reduce the number of manned aircraft needed on some missions and thereby remove at least some human pilots from harm’s way. Ushering autonomous UAVs into the battlespace is “not just a matter of self-reporting to the human pilots what it is doing, like a sophisticated transponder, but being able to make decision recommendations, alleviating the [pilot’s or military air traffic controller’s] responsibilities, leaving him to be a tactician or battlespace commander more effectively. That touches on a lot of what DARPA is doing,” Chung said. “On the ground, you see … Ground X-Vehicle Technologies, which are more about crew augmentation, such as instrumenting a windowless ground vehicle so the crew inside will have a better situational awareness of their environment. At sea, being able to maneuver, especially underwater, remains an active area for the development of autonomy options. The Cross-Domain Maritime Surveillance and Targeting [CDMaST]) program, for example, is trying to better monitor and protect the waters, and part of the vision includes autonomous systems. These could provide cuing to other systems – manned or unmanned – to defend and protect those areas. So a distributed network of sensors and autonomous vehicles could help shape the waterscape for maritime warfare. DARPA’s OFFSET program is all about leveraging tactical opportunities that could come with coordinating swarms of air and ground robots – up to 250 of them – in urban areas. Missions could include aiding a small unit of warfighters charged with securing a bridge, or more crucially, aiding in the historically challenging and costly task of clearing a multi-floor building of the enemy. Important to this technology vision is understanding where such swarms excel and where they don’t at all. “The complexity, command, and design space of 250 physically disjointed robots, some air, some ground, with different speeds and capabilities,

An artist’s conception of manned and unmanned aircraft working cooperatively as envisioned in the Collaborative Operations in Denied Environment (CODE) program. CODE intends to focus on developing and demonstrating improvements in collaborative autonomy: the capability for groups of UAS to work together under a single human commander’s supervision.