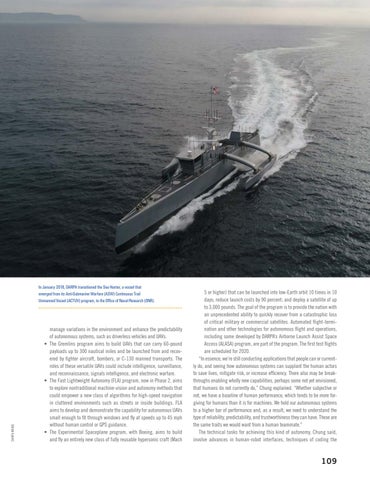 In January 2018, DARPA transitioned the Sea Hunter, a vessel that emerged from its Anti-Submarine Warfare (ASW) Continuous Trail Unmanned Vessel (ACTUV) program, to the Office of Naval Research (ONR).

manage variations in the environment and enhance the predictability of autonomous systems, such as driverless vehicles and UAVs. • The Gremlins program aims to build UAVs that can carry 60-pound payloads up to 300 nautical miles and be launched from and recovered by fighter aircraft, bombers, or C-130 manned transports. The roles of these versatile UAVs could include intelligence, surveillance, and reconnaissance, signals intelligence, and electronic warfare. • The Fast Lightweight Autonomy (FLA) program, now in Phase 2, aims to explore nontraditional machine-vision and autonomy methods that could empower a new class of algorithms for high-speed navigation in cluttered environments such as streets or inside buildings. FLA aims to develop and demonstrate the capability for autonomous UAVs small enough to fit through windows and fly at speeds up to 45 mph without human control or GPS guidance. • The Experimental Spaceplane program, with Boeing, aims to build and fly an entirely new class of fully reusable hypersonic craft (Mach

5 or higher) that can be launched into low-Earth orbit 10 times in 10 days; reduce launch costs by 90 percent; and deploy a satellite of up to 3,000 pounds. The goal of the program is to provide the nation with an unprecedented ability to quickly recover from a catastrophic loss of critical military or commercial satellites. Automated flight-termination and other technologies for autonomous flight and operations, including some developed by DARPA’s Airborne Launch Assist Space Access (ALASA) program, are part of the program. The first test flights are scheduled for 2020. “In essence, we’re still conducting applications that people can or currently do, and seeing how autonomous systems can supplant the human actors to save lives, mitigate risk, or increase efficiency. There also may be breakthroughs enabling wholly new capabilities, perhaps some not yet envisioned, that humans do not currently do,” Chung explained. “Whether subjective or not, we have a baseline of human performance, which tends to be more forgiving for humans than it is for machines. We hold our autonomous systems to a higher bar of performance and, as a result, we need to understand the type of reliability, predictability, and trustworthiness they can have. These are the same traits we would want from a human teammate.” The technical tasks for achieving this kind of autonomy, Chung said, involve advances in human-robot interfaces, techniques of coding the