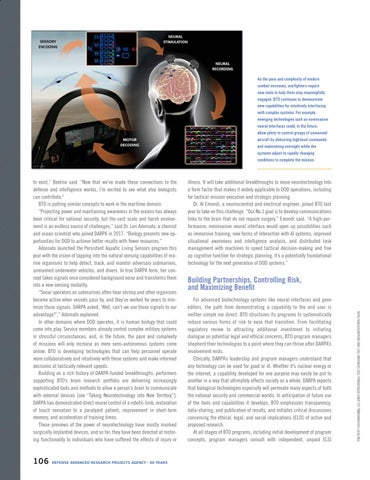 As the pace and complexity of modern combat increases, warfighters require new tools to help them stay meaningfully engaged. BTO continues to demonstrate new capabilities for intuitively interfacing with complex systems. For example, emerging technologies such as noninvasive neural interfaces could, in the future, allow pilots to control groups of unmanned aircraft by delivering high-level commands and maintaining oversight while the systems adjust to rapidly changing conditions to complete the mission.

illness. It will take additional breakthroughs to move neurotechnology into a form factor that makes it widely applicable to DOD operations, including for tactical mission execution and strategic planning. Dr. Al Emondi, a neuroscientist and electrical engineer, joined BTO last year to take on this challenge. “Our No.1 goal is to develop communications links to the brain that do not require surgery,” Emondi said. “A high-performance, noninvasive neural interface would open up possibilities such as immersive training, new forms of interaction with AI systems, improved situational awareness and intelligence analysis, and distributed task management with machines to speed tactical decision-making and free up cognitive function for strategic planning. It’s a potentially foundational technology for the next generation of DOD systems.”

Building Partnerships, Controlling Risk, and Maximizing Benefit For advanced biotechnology systems like neural interfaces and gene editors, the path from demonstrating a capability to the end user is neither simple nor direct. BTO structures its programs to systematically reduce various forms of risk to ease that transition. From facilitating regulatory review to attracting additional investment to initiating dialogue on potential legal and ethical concerns, BTO program managers shepherd their technologies to a point where they can thrive after DARPA’s involvement ends. Ethically, DARPA’s leadership and program managers understand that any technology can be used for good or ill. Whether it’s nuclear energy or the internet, a capability developed for one purpose may easily be put to another in a way that ultimately affects society as a whole. DARPA expects that biological technologies especially will permeate many aspects of both the national security and commercial worlds. In anticipation of future use of the tools and capabilities it develops, BTO emphasizes transparency, data-sharing, and publication of results, and initiates critical discussions concerning the ethical, legal, and social implications (ELSI) of active and proposed research. At all stages of BTO programs, including initial development of program concepts, program managers consult with independent, unpaid ELSI

to exist,” Bextine said. “Now that we’ve made these connections to the defense and intelligence worlds, I’m excited to see what else biologists can contribute.” BTO is putting similar concepts to work in the maritime domain. “Projecting power and maintaining awareness in the oceans has always been critical for national security, but the vast scale and harsh environment is an endless source of challenges,” said Dr. Lori Adornato, a chemist and ocean scientist who joined DARPA in 2017. “Biology presents new opportunities for DOD to achieve better results with fewer resources.” Adornato launched the Persistent Aquatic Living Sensors program this year with the vision of tapping into the natural sensing capabilities of marine organisms to help detect, track, and monitor adversary submarines, unmanned underwater vehicles, and divers. In true DARPA form, her concept takes signals once considered background noise and transforms them into a new sensing modality. “Sonar operators on submarines often hear shrimp and other organisms become active when vessels pass by, and they’ve worked for years to minimize those signals. DARPA asked, ‘Well, can’t we use those signals to our advantage?’,” Adornato explained. In other domains where DOD operates, it is human biology that could come into play. Service members already control complex military systems in stressful circumstances, and, in the future, the pace and complexity of missions will only increase as more semi-autonomous systems come online. BTO is developing technologies that can help personnel operate more collaboratively and intuitively with these systems and make informed decisions at tactically relevant speeds. Building on a rich history of DARPA-funded breakthroughs, performers supporting BTO’s brain research portfolio are delivering increasingly sophisticated tools and methods to allow a person’s brain to communicate with external devices [see “Taking Neurotechnology into New Territory”]. DARPA has demonstrated direct neural control of a robotic limb, restoration of touch sensation to a paralyzed patient, improvement in short-term memory, and acceleration of training times. These previews of the power of neurotechnology have mostly involved surgically implanted devices, and so far, they have been directed at restoring functionality to individuals who have suffered the effects of injury or