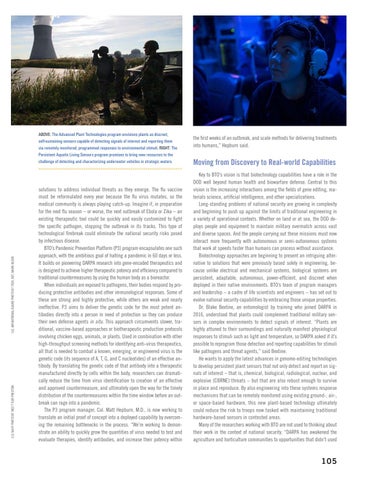 ABOVE: The Advanced Plant Technologies program envisions plants as discreet, self-sustaining sensors capable of detecting signals of interest and reporting them via remotely monitored, programmed responses to environmental stimuli. RIGHT: The Persistent Aquatic Living Sensors program promises to bring new resources to the challenge of detecting and characterizing underwater vehicles in strategic waters.

solutions to address individual threats as they emerge. The flu vaccine must be reformulated every year because the flu virus mutates, so the medical community is always playing catch-up. Imagine if, in preparation for the next flu season – or worse, the next outbreak of Ebola or Zika – an existing therapeutic tool could be quickly and easily customized to fight the specific pathogen, stopping the outbreak in its tracks. This type of technological firebreak could eliminate the national security risks posed by infectious disease. BTO’s Pandemic Prevention Platform (P3) program encapsulates one such approach, with the ambitious goal of halting a pandemic in 60 days or less. It builds on pioneering DARPA research into gene-encoded therapeutics and is designed to achieve higher therapeutic potency and efficiency compared to traditional countermeasures by using the human body as a bioreactor. When individuals are exposed to pathogens, their bodies respond by producing protective antibodies and other immunological responses. Some of these are strong and highly protective, while others are weak and nearly ineffective. P3 aims to deliver the genetic code for the most potent antibodies directly into a person in need of protection so they can produce their own defense agents in situ. This approach circumvents slower, traditional, vaccine-based approaches or biotherapeutic production protocols involving chicken eggs, animals, or plants. Used in combination with other high-throughput screening methods for identifying anti-virus therapeutics, all that is needed to combat a known, emerging, or engineered virus is the genetic code (its sequence of A, T, G, and C nucleotides) of an effective antibody. By translating the genetic code of that antibody into a therapeutic manufactured directly by cells within the body, researchers can dramatically reduce the time from virus identification to creation of an effective and approved countermeasure, and ultimately open the way for the timely distribution of the countermeasures within the time window before an outbreak can rage into a pandemic. The P3 program manager, Col. Matt Hepburn, M.D., is now working to translate an initial proof of concept into a deployed capability by overcoming the remaining bottlenecks in the process. “We’re working to demonstrate an ability to quickly grow the quantities of virus needed to test and evaluate therapies, identify antibodies, and increase their potency within

the first weeks of an outbreak, and scale methods for delivering treatments into humans,” Hepburn said.

Moving from Discovery to Real-world Capabilities Key to BTO’s vision is that biotechnology capabilities have a role in the DOD well beyond human health and biowarfare defense. Central to this vision is the increasing interactions among the fields of gene editing, materials science, artificial intelligence, and other specializations. Long-standing problems of national security are growing in complexity and beginning to push up against the limits of traditional engineering in a variety of operational contexts. Whether on land or at sea, the DOD deploys people and equipment to maintain military overmatch across vast and diverse spaces. And the people carrying out these missions must now interact more frequently with autonomous or semi-autonomous systems that work at speeds faster than humans can process without assistance. Biotechnology approaches are beginning to present an intriguing alternative to solutions that were previously based solely in engineering, because unlike electrical and mechanical systems, biological systems are persistent, adaptable, autonomous, power-efficient, and discreet when deployed in their native environments. BTO’s team of program managers and leadership – a cadre of life scientists and engineers – has set out to evolve national security capabilities by embracing those unique properties. Dr. Blake Bextine, an entomologist by training who joined DARPA in 2016, understood that plants could complement traditional military sensors in complex environments to detect signals of interest. “Plants are highly attuned to their surroundings and naturally manifest physiological responses to stimuli such as light and temperature, so DARPA asked if it’s possible to reprogram those detection and reporting capabilities for stimuli like pathogens and threat agents,” said Bextine. He wants to apply the latest advances in genome-editing technologies to develop persistent plant sensors that not only detect and report on signals of interest – that is, chemical, biological, radiological, nuclear, and explosive (CBRNE) threats – but that are also robust enough to survive in place and reproduce. By also engineering into these systems response mechanisms that can be remotely monitored using existing ground-, air-, or space-based hardware, this new plant-based technology ultimately could reduce the risk to troops now tasked with maintaining traditional hardware-based sensors in contested areas. Many of the researchers working with BTO are not used to thinking about their work in the context of national security. “DARPA has awakened the agriculture and horticulture communities to opportunities that didn’t used