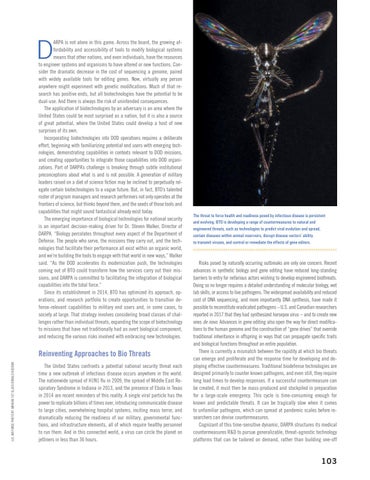 ARPA is not alone in this game. Across the board, the growing affordability and accessibility of tools to modify biological systems means that other nations, and even individuals, have the resources to engineer systems and organisms to have altered or new functions. Consider the dramatic decrease in the cost of sequencing a genome, paired with widely available tools for editing genes. Now, virtually any person anywhere might experiment with genetic modifications. Much of that research has positive ends, but all biotechnologies have the potential to be dual-use. And there is always the risk of unintended consequences. The application of biotechnologies by an adversary is an area where the United States could be most surprised as a nation, but it is also a source of great potential, where the United States could develop a host of new surprises of its own. Incorporating biotechnologies into DOD operations requires a deliberate effort, beginning with familiarizing potential end users with emerging technologies, demonstrating capabilities in contexts relevant to DOD missions, and creating opportunities to integrate those capabilities into DOD organizations. Part of DARPA’s challenge is breaking through subtle institutional preconceptions about what is and is not possible. A generation of military leaders raised on a diet of science fiction may be inclined to perpetually relegate certain biotechnologies to a vague future. But, in fact, BTO’s talented roster of program managers and research performers not only operates at the frontiers of science, but thinks beyond them, and the seeds of those tools and capabilities that might sound fantastical already exist today. The emerging importance of biological technologies for national security is an important decision-making driver for Dr. Steven Walker, Director of DARPA. “Biology percolates throughout every aspect of the Department of Defense. The people who serve, the missions they carry out, and the technologies that facilitate their performance all exist within an organic world, and we’re building the tools to engage with that world in new ways,” Walker said. “As the DOD accelerates its modernization push, the technologies coming out of BTO could transform how the services carry out their missions, and DARPA is committed to facilitating the integration of biological capabilities into the total force.” Since its establishment in 2014, BTO has optimized its approach, operations, and research portfolio to create opportunities to transition defense-relevant capabilities to military end users and, in some cases, to society at large. That strategy involves considering broad classes of challenges rather than individual threats, expanding the scope of biotechnology to missions that have not traditionally had an overt biological component, and reducing the various risks involved with embracing new technologies.

Reinventing Approaches to Bio Threats The United States confronts a potential national security threat each time a new outbreak of infectious disease occurs anywhere in the world. The nationwide spread of H1N1 flu in 2009, the spread of Middle East Respiratory Syndrome in Indiana in 2013, and the presence of Ebola in Texas in 2014 are recent reminders of this reality. A single viral particle has the power to replicate billions of times over, introducing communicable disease to large cities, overwhelming hospital systems, inciting mass terror, and dramatically reducing the readiness of our military, governmental functions, and infrastructure elements, all of which require healthy personnel to run them. And in this connected world, a virus can circle the planet on jetliners in less than 36 hours.

The threat to force health and readiness posed by infectious disease is persistent and evolving. BTO is developing a range of countermeasures to natural and engineered threats, such as technologies to predict viral evolution and spread, contain diseases within animal reservoirs, disrupt disease vectors’ ability to transmit viruses, and control or remediate the effects of gene editors.

Risks posed by naturally occurring outbreaks are only one concern. Recent advances in synthetic biology and gene editing have reduced long-standing barriers to entry for nefarious actors wishing to develop engineered biothreats. Doing so no longer requires a detailed understanding of molecular biology, wet lab skills, or access to live pathogens. The widespread availability and reduced cost of DNA sequencing, and more importantly DNA synthesis, have made it possible to reconstitute eradicated pathogens – U.S. and Canadian researchers reported in 2017 that they had synthesized horsepox virus – and to create new ones de novo. Advances in gene editing also open the way for direct modifications to the human genome and the construction of “gene drives” that override traditional inheritance in offspring in ways that can propagate specific traits and biological functions throughout an entire population. There is currently a mismatch between the rapidity at which bio threats can emerge and proliferate and the response time for developing and deploying effective countermeasures. Traditional biodefense technologies are designed primarily to counter known pathogens, and even still, they require long lead times to develop responses. If a successful countermeasure can be created, it must then be mass-produced and stockpiled in preparation for a large-scale emergency. This cycle is time-consuming enough for known and predictable threats. It can be tragically slow when it comes to unfamiliar pathogens, which can spread at pandemic scales before researchers can devise countermeasures. Cognizant of this time-sensitive dynamic, DARPA structures its medical countermeasures R&D to pursue generalizable, threat-agnostic technology platforms that can be tailored on demand, rather than building one-off