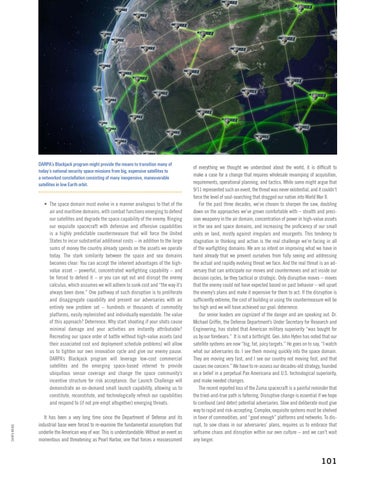 DARPA’s Blackjack program might provide the means to transition many of today’s national security space missions from big, expensive satellites to a networked constellation consisting of many inexpensive, maneuverable satellites in low Earth orbit.

• The space domain must evolve in a manner analogous to that of the air and maritime domains, with combat functions emerging to defend our satellites and degrade the space capability of the enemy. Ringing our exquisite spacecraft with defensive and offensive capabilities is a highly predictable countermeasure that will force the United States to incur substantial additional costs – in addition to the large sums of money the country already spends on the assets we operate today. The stark similarity between the space and sea domains becomes clear: You can accept the inherent advantages of the highvalue asset – powerful, concentrated warfighting capability – and be forced to defend it – or you can opt out and disrupt the enemy calculus, which assumes we will adhere to sunk cost and “the way it’s always been done.” One pathway of such disruption is to proliferate and disaggregate capability and present our adversaries with an entirely new problem set – hundreds or thousands of commodity platforms, easily replenished and individually expendable. The value of this approach? Deterrence. Why start shooting if your shots cause minimal damage and your activities are instantly attributable? Recreating our space order of battle without high-value assets (and their associated cost and deployment schedule problems) will allow us to tighten our own innovation cycle and give our enemy pause. DARPA’s Blackjack program will leverage low-cost commercial satellites and the emerging space-based internet to provide ubiquitous sensor coverage and change the space community’s incentive structure for risk acceptance. Our Launch Challenge will demonstrate an on-demand small launch capability, allowing us to constitute, reconstitute, and technologically refresh our capabilities and respond to (if not pre-empt altogether) emerging threats. It has been a very long time since the Department of Defense and its industrial base were forced to re-examine the fundamental assumptions that underlie the American way of war. This is understandable: Without an event as momentous and threatening as Pearl Harbor, one that forces a reassessment

of everything we thought we understood about the world, it is difficult to make a case for a change that requires wholesale revamping of acquisition, requirements, operational planning, and tactics. While some might argue that 9/11 represented such an event, the threat was never existential, and it couldn’t force the level of soul-searching that dragged our nation into World War II. For the past three decades, we’ve chosen to sharpen the saw, doubling down on the approaches we’ve grown comfortable with – stealth and precision weaponry in the air domain, concentration of power in high-value assets in the sea and space domains, and increasing the proficiency of our small units on land, mostly against irregulars and insurgents. This tendency to stagnation in thinking and action is the real challenge we’re facing in all of the warfighting domains: We are so intent on improving what we have in hand already that we prevent ourselves from fully seeing and addressing the actual and rapidly evolving threat we face. And the real threat is an adversary that can anticipate our moves and countermoves and act inside our decision cycles, be they tactical or strategic. Only disruptive moves – moves that the enemy could not have expected based on past behavior – will upset the enemy’s plans and make it expensive for them to act. If the disruption is sufficiently extreme, the cost of building or using the countermeasure will be too high and we will have achieved our goal: deterrence. Our senior leaders are cognizant of the danger and are speaking out. Dr. Michael Griffin, the Defense Department’s Under Secretary for Research and Engineering, has stated that American military superiority “was bought for us by our forebears.” It is not a birthright. Gen. John Hyten has noted that our satellite systems are now “big, fat, juicy targets.” He goes on to say, “I watch what our adversaries do. I see them moving quickly into the space domain. They are moving very fast, and I see our country not moving fast, and that causes me concern.” We have to re-assess our decades-old strategy, founded on a belief in a perpetual Pax Americana and U.S. technological superiority, and make needed changes. The recent reported loss of the Zuma spacecraft is a painful reminder that the tried-and-true path is faltering. Disruptive change is essential if we hope to confound (and deter) potential adversaries. Slow and deliberate must give way to rapid and risk-accepting. Complex, exquisite systems must be shelved in favor of commodities, and “good enough” platforms and networks. To disrupt, to sow chaos in our adversaries’ plans, requires us to embrace that selfsame chaos and disruption within our own culture – and we can’t wait any longer.