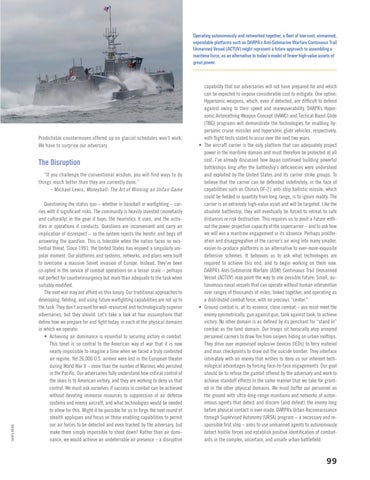 Operating autonomously and networked together, a fleet of low-cost, unmanned, expendable platforms such as DARPA’s Anti-Submarine Warfare Continuous Trail Unmanned Vessel (ACTUV) might represent a future approach to assembling a maritime force, as an alternative to today’s model of fewer high-value assets of great power.

Predictable countermoves offered up on glacial schedules won’t work. We have to surprise our adversary.

“If you challenge the conventional wisdom, you will find ways to do things much better than they are currently done.” – Michael Lewis, Moneyball: The Art of Winning an Unfair Game Questioning the status quo – whether in baseball or warfighting – carries with it significant risks. The community is heavily invested (monetarily and culturally) in the gear it buys, the heuristics it uses, and the activities or operations it conducts. Questions are inconvenient and carry an implication of disrespect – so the system rejects the heretic and begs off answering the question. This is tolerable when the nation faces no existential threat. Since 1991, the United States has enjoyed a singularly unipolar moment. Our platforms and systems, networks, and plans were built to overcome a massive Soviet invasion of Europe. Instead, they’ve been co-opted in the service of combat operations on a lesser scale – perhaps not perfect for counterinsurgency but more than adequate to the task when suitably modified. The next war may not afford us this luxury. Our traditional approaches to developing, fielding, and using future warfighting capabilities are not up to the task. They don’t account for well-resourced and technologically superior adversaries, but they should. Let’s take a look at four assumptions that define how we prepare for and fight today, in each of the physical domains in which we operate: • Achieving air dominance is essential to securing victory in combat. This tenet is so central to the American way of war that it is now nearly impossible to imagine a time when we faced a truly contested air regime. Yet 26,000 U.S. airmen were lost in the European theater during World War II – more than the number of Marines who perished in the Pacific. Our adversaries fully understand how critical control of the skies is to American victory, and they are working to deny us that control. We must ask ourselves if success in combat can be achieved without devoting immense resources to suppression of air defense systems and enemy aircraft, and what technologies would be needed to allow for this. Might it be possible for us to forgo the next round of stealth appliques and focus on those enabling capabilities to permit our air forces to be detected and even tracked by the adversary, but make them simply impossible to shoot down? Rather than air dominance, we would achieve an undeterrable air presence – a disruptive

capability that our adversaries will not have prepared for and which can be expected to impose considerable cost to mitigate. One option: Hypersonic weapons, which, even if detected, are difficult to defend against owing to their speed and maneuverability. DARPA’s Hypersonic Airbreathing Weapon Concept (HAWC) and Tactical Boost Glide (TBG) programs will demonstrate the technologies for enabling hypersonic cruise missiles and hypersonic glide vehicles, respectively, with flight tests slated to occur over the next two years. • The aircraft carrier is the only platform that can adequately project power in the maritime domain and must therefore be protected at all cost. I’ve already discussed how Japan continued building powerful battleships long after the battleship’s deficiencies were understood and exploited by the United States and its carrier strike groups. To believe that the carrier can be defended indefinitely, in the face of capabilities such as China’s DF-21 anti-ship ballistic missile, which could be fielded in quantity from long range, is to ignore reality. The carrier is an extremely high-value asset and will be targeted. Like the obsolete battleship, they will eventually be forced to retreat to safe distances or risk destruction. This requires us to posit a future without the power-projection capacity of the supercarrier – and to ask how we will win a maritime engagement in its absence. Perhaps proliferation and disaggregation of the carrier’s air wing into many smaller, easier-to-produce platforms is an alternative to ever-more-exquisite defensive schemes. It behooves us to ask what technologies are required to achieve this end, and to begin working on them now. DARPA’s Anti-Submarine Warfare (ASW) Continuous Trail Unmanned Vessel (ACTUV) may point the way to one possible future: Small, autonomous naval vessels that can operate without human intervention over ranges of thousands of miles, linked together, and operating as a distributed combat force, with no precious “center.” • Ground combat is, at its essence, close combat – you must meet the enemy symmetrically, gun against gun, tank against tank, to achieve victory. No other domain is as defined by its penchant for “stand in” combat as the land domain. Our troops sit heroically atop armored personnel carriers to draw fire from snipers hiding on urban rooftops. They drive over improvised explosive devices (IEDs) to ferry materiel and man checkpoints to draw out the suicide bomber. They interface intimately with an enemy that wishes to deny us our inherent technological advantages by forcing face-to-face engagements. Our goal should be to refuse the gambit offered by the adversary and work to achieve standoff effects in the same manner that we take for granted in the other physical domains. We must buffer our personnel on the ground with ultra-long-range munitions and networks of autonomous agents that detect and discern (and defeat) the enemy long before physical contact is ever made. DARPA’s Urban Reconnaissance through Supervised Autonomy (URSA) program – a necessary and responsible first step – aims to use unmanned agents to autonomously detect hostile forces and establish positive identification of combatants in the complex, uncertain, and unsafe urban battlefield.