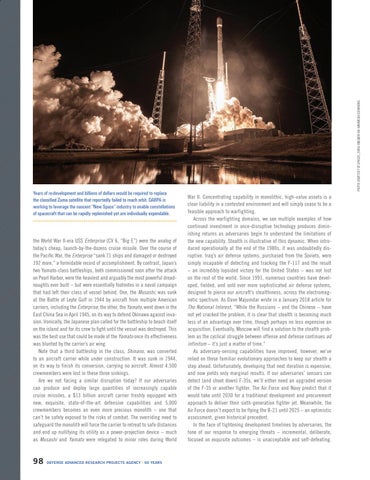 the World War II-era USS Enterprise (CV 6, “Big E”) were the analog of today’s cheap, launch-by-the-dozens cruise missile. Over the course of the Pacific War, the Enterprise “sank 71 ships and damaged or destroyed 192 more,” a formidable record of accomplishment. By contrast, Japan’s two Yamato-class battleships, both commissioned soon after the attack on Pearl Harbor, were the heaviest and arguably the most powerful dreadnoughts ever built – but were essentially footnotes in a naval campaign that had left their class of vessel behind. One, the Musashi, was sunk at the Battle of Leyte Gulf in 1944 by aircraft from multiple American carriers, including the Enterprise; the other, the Yamato, went down in the East China Sea in April 1945, on its way to defend Okinawa against invasion. Ironically, the Japanese plan called for the battleship to beach itself on the island and for its crew to fight until the vessel was destroyed. This was the best use that could be made of the Yamato once its effectiveness was blunted by the carrier’s air wing. Note that a third battleship in the class, Shinano, was converted to an aircraft carrier while under construction. It was sunk in 1944, on its way to finish its conversion, carrying no aircraft. Almost 4,500 crewmembers were lost in these three sinkings. Are we not facing a similar disruption today? If our adversaries can produce and deploy large quantities of increasingly capable cruise missiles, a $13 billion aircraft carrier freshly equipped with new, exquisite, state-of-the-art defensive capabilities and 5,000 crewmembers becomes an even more precious monolith – one that can’t be safely exposed to the risks of combat. The overriding need to safeguard the monolith will force the carrier to retreat to safe distances and end up nullifying its utility as a power-projection device – much as Musashi and Yamato were relegated to minor roles during World

Years of re-development and billions of dollars would be required to replace the classified Zuma satellite that reportedly failed to reach orbit. DARPA is working to leverage the nascent “New Space” industry to enable constellations of spacecraft that can be rapidly replenished yet are individually expendable.

War II. Concentrating capability in monolithic, high-value assets is a clear liability in a contested environment and will simply cease to be a feasible approach to warfighting. Across the warfighting domains, we see multiple examples of how continued investment in once-disruptive technology produces diminishing returns as adversaries begin to understand the limitations of the new capability. Stealth is illustrative of this dynamic. When introduced operationally at the end of the 1980s, it was undoubtedly disruptive. Iraq’s air defense systems, purchased from the Soviets, were simply incapable of detecting and tracking the F-117 and the result – an incredibly lopsided victory for the United States – was not lost on the rest of the world. Since 1991, numerous countries have developed, fielded, and sold ever more sophisticated air defense systems, designed to pierce our aircraft’s stealthiness, across the electromagnetic spectrum. As Dave Majumdar wrote in a January 2018 article for The National Interest, “While the Russians – and the Chinese – have not yet cracked the problem, it is clear that stealth is becoming much less of an advantage over time, though perhaps no less expensive an acquisition. Eventually, Moscow will find a solution to the stealth problem as the cyclical struggle between offense and defense continues ad infinitum – it’s just a matter of time.” As adversary-sensing capabilities have improved, however, we’ve relied on those familiar evolutionary approaches to keep our stealth a step ahead. Unfortunately, developing that next iteration is expensive, and now yields only marginal results. If our adversaries’ sensors can detect (and shoot down) F-35s, we’ll either need an upgraded version of the F-35 or another fighter. The Air Force and Navy predict that it would take until 2030 for a traditional development and procurement approach to deliver their sixth-generation fighter jet. Meanwhile, the Air Force doesn’t expect to be flying the B-21 until 2025 – an optimistic assessment, given historical precedent. In the face of tightening development timelines by adversaries, the tone of our response to emerging threats – incremental, deliberate, focused on exquisite outcomes – is unacceptable and self-defeating.