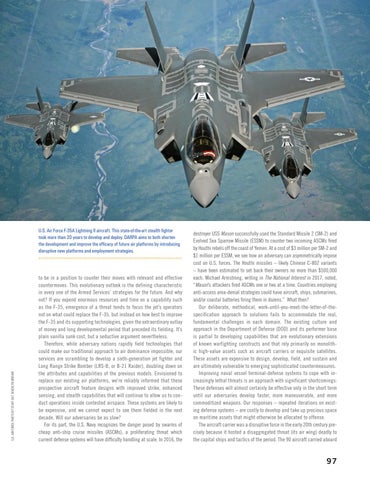 to be in a position to counter their moves with relevant and effective countermoves. This evolutionary outlook is the defining characteristic in every one of the Armed Services’ strategies for the future. And why not? If you expend enormous resources and time on a capability such as the F-35, emergence of a threat tends to focus the jet’s operators not on what could replace the F-35, but instead on how best to improve the F-35 and its supporting technologies, given the extraordinary outlay of money and long developmental period that preceded its fielding. It’s plain vanilla sunk cost, but a seductive argument nevertheless. Therefore, while adversary nations rapidly field technologies that could make our traditional approach to air dominance impossible, our services are scrambling to develop a sixth-generation jet fighter and Long Range Strike Bomber (LRS-B, or B-21 Raider), doubling down on the attributes and capabilities of the previous models. Envisioned to replace our existing air platforms, we’re reliably informed that these prospective aircraft feature designs with improved strike, enhanced sensing, and stealth capabilities that will continue to allow us to conduct operations inside contested airspace. These systems are likely to be expensive, and we cannot expect to see them fielded in the next decade. Will our adversaries be as slow? For its part, the U.S. Navy recognizes the danger posed by swarms of cheap anti-ship cruise missiles (ASCMs), a proliferating threat which current defense systems will have difficulty handling at scale. In 2016, the

destroyer USS Mason successfully used the Standard Missile 2 (SM-2) and Evolved Sea Sparrow Missile (ESSM) to counter two incoming ASCMs fired by Houthi rebels off the coast of Yemen. At a cost of $3 million per SM-2 and $1 million per ESSM, we see how an adversary can asymmetrically impose cost on U.S. forces. The Houthi missiles – likely Chinese C-802 variants – have been estimated to set back their owners no more than $500,000 each. Michael Armstrong, writing in The National Interest in 2017, noted, “Mason’s attackers fired ASCMs one or two at a time. Countries employing anti-access area-denial strategies could have aircraft, ships, submarines, and/or coastal batteries firing them in dozens.” What then? Our deliberate, methodical, work-until-you-meet-the-letter-of-thespecification approach to solutions fails to accommodate the real, fundamental challenges in each domain. The existing culture and approach in the Department of Defense (DOD) and its performer base is partial to developing capabilities that are evolutionary extensions of known warfighting constructs and that rely primarily on monolithic high-value assets such as aircraft carriers or exquisite satellites. These assets are expensive to design, develop, field, and sustain and are ultimately vulnerable to emerging sophisticated countermeasures. Improving naval vessel terminal-defense systems to cope with increasingly lethal threats is an approach with significant shortcomings: These defenses will almost certainly be effective only in the short term until our adversaries develop faster, more maneuverable, and more commoditized weapons. Our responses – repeated iterations on existing defense systems – are costly to develop and take up precious space on maritime assets that might otherwise be allocated to offense. The aircraft carrier was a disruptive force in the early 20th century precisely because it hosted a disaggregated threat (its air wing) deadly to the capital ships and tactics of the period. The 90 aircraft carried aboard