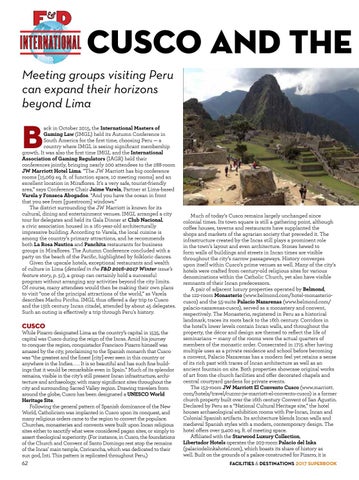 ack in October 2015, the International Masters of Gaming Law (IMGL) held its Autumn Conference in South America for the first time, choosing Peru — a country where IMGL is seeing significant membership growth. It was also the first time IMGL and the International Association of Gaming Regulators (IAGR) held their conferences jointly, bringing nearly 200 attendees to the 288-room JW Marriott Hotel Lima. “The JW Marriott has big conference rooms [15,069 sq. ft. of function space, 10 meeting rooms] and an excellent location in Miraflores. It’s a very safe, tourist-friendly area,” says Conference Chair Jaime Varela, Partner at Lima-based Varela y Fonseca Abogados. “And you have the ocean in front that you see from [guestroom] windows.” The district surrounding the JW Marriott is known for its cultural, dining and entertainment venues. IMGL arranged a city tour for delegates and held its Gala Dinner at Club Nacional, a civic association housed in a 161-year-old architecturally impressive building. According to Varela, the local cuisine is among the country’s primary attractions, and he recommends both La Rosa Nautica and Panchita restaurants for business groups in Miraflores. The Autumn Conference concluded with a party on the beach of the Pacific, highlighted by folkloric dances. Given the upscale hotels, exceptional restaurants and wealth of culture in Lima (detailed in the F&D 2016-2017 Winter issue’s feature story, p. 51), a group can certainly hold a successful program without arranging any activities beyond the city limits. Of course, many attendees would then be making their own plans to visit “one of the principal attractions of the world,” as Varela describes Machu Picchu. IMGL thus offered a day trip to Cusco and the 15th century Incan citadel, attended by about 45 delegates. Such an outing is effectively a trip through Peru’s history.

While Pizarro designated Lima as the country’s capital in 1535, the capital was Cusco during the reign of the Incas. Amid his journey to conquer the region, conquistador Francisco Pizarro himself was amazed by the city, proclaiming to the Spanish monarch that Cusco was “the greatest and the finest [city] ever seen in this country or anywhere in the Indies. . . . It is so beautiful and has such fine buildings that it would be remarkable even in Spain.” Much of its splendor remains, visible in the city’s still present Incan infrastructure, architecture and archaeology, with many significant sites throughout the city and surrounding Sacred Valley region. Drawing travelers from around the globe, Cusco has been designated a UNESCO World Heritage Site. Following the general pattern of Spanish dominance of the New World, Catholicism was implanted in Cusco upon its conquest, and many religious orders came to the region to convert the populace. Churches, monasteries and convents were built upon Incan religious sites either to sanctify what were considered pagan sites, or simply to assert theological superiority. (For instance, in Cusco, the foundations of the Church and Convent of Santo Domingo rest atop the remains of the Incas’ main temple, Coricancha, which was dedicated to their sun god, Inti. This pattern is replicated throughout Peru.) 62

Much of today’s Cusco remains largely unchanged since colonial times. Its town square is still a gathering point, although coffee houses, taverns and restaurants have supplanted the shops and markets of the agrarian society that preceded it. The infrastructure created by the Incas still plays a prominent role in the town’s layout and even architecture. Stones hewed to form walls of buildings and streets in Incan times are visible throughout the city’s narrow passageways. History converges upon itself within Cusco’s prime venues as well. Many of the city’s hotels were crafted from century-old religious sites for various denominations within the Catholic Church, yet also have visible remnants of their Incan predecessors. A pair of adjacent luxury properties operated by Belmond, the 122-room Monasterio (www.belmond.com/hotel-monasteriocusco) and the 55-suite Palacio Nazarenas (www.belmond.com/ palacio-nazarenas-cusco), served as a monastery and convent, respectively. The Monasterio, registered in Peru as a historical landmark, traces its roots back to the 16th century. Corridors in the hotel’s lower levels contain Incan walls, and throughout the property, the décor and design are themed to reflect the life of seminarians — many of the rooms were the actual quarters of members of the monastic order. Consecrated in 1715 after having multiple uses as a private residence and school before becoming a convent, Palacio Nazarenas has a modern feel yet retains a sense of its rich past with traces of Incan architecture as well as an ancient fountain on site. Both properties showcase original works of art from the church facilities and offer decorated chapels and central courtyard gardens for private events. The 153-room JW Marriott El Convento Cusco (www.marriott. com/hotels/travel/cuzmc-jw-marriott-el-convento-cusco) is a former church property built over the 16th century Convent of San Agustin. Declared by Peru as a “National Cultural Heritage site,” the hotel houses archaeological exhibition rooms with Pre-Incan, Incan and Colonial Spanish artifacts. Its architecture blends Incan walls and medieval Spanish styles with a modern, contemporary design. The hotel offers over 9,400 sq. ft. of meeting space. Affiliated with the Starwood Luxury Collection, Libertador Hotels operates the 203-room Palacio del Inka (palaciodelinkahotel.com), which boasts its share of history as well. Built on the grounds of a palace constructed for Pizarro, it is Facilities & DESTINATIONS 2017 Superbook