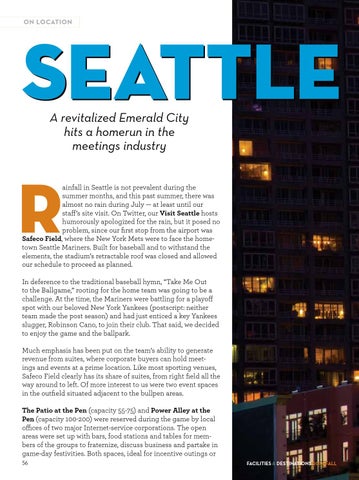 ainfall in Seattle is not prevalent during the summer months, and this past summer, there was almost no rain during July — at least until our staff’s site visit. On Twitter, our Visit Seattle hosts humorously apologized for the rain, but it posed no problem, since our first stop from the airport was Safeco Field, where the New York Mets were to face the hometown Seattle Mariners. Built for baseball and to withstand the elements, the stadium’s retractable roof was closed and allowed our schedule to proceed as planned. In deference to the traditional baseball hymn, “Take Me Out to the Ballgame,” rooting for the home team was going to be a challenge. At the time, the Mariners were battling for a playoff spot with our beloved New York Yankees (postscript: neither team made the post season) and had just enticed a key Yankees slugger, Robinson Cano, to join their club. That said, we decided to enjoy the game and the ballpark. Much emphasis has been put on the team’s ability to generate revenue from suites, where corporate buyers can hold meetings and events at a prime location. Like most sporting venues, Safeco Field clearly has its share of suites, from right field all the way around to left. Of more interest to us were two event spaces in the outfield situated adjacent to the bullpen areas. The Patio at the Pen (capacity 55-75) and Power Alley at the Pen (capacity 100-200) were reserved during the game by local offices of two major Internet-service corporations. The open areas were set up with bars, food stations and tables for members of the groups to fraternize, discuss business and partake in game-day festivities. Both spaces, ideal for incentive outings or